The money is how we keep score 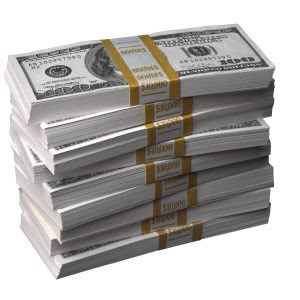 That title refers to what a poker player once said and I have to agree. Tonight the score is $380 for me to 0 for most of the other people in the tourney I was in today. And though the stack above is a bit more than I have in my pocket right now, it almost feels the same.

Yes I spent a 3rd night in a row in a poker room Sunday. I told the wife last night that since she was too tired yesterday to play and I had a little extra cash, I would stake her in a tourney on Sunday. So we went over to Derby Lane to play in the 7 PM tourney tonight. Or actually, she was going to play and I would play some Omaha while she played in the tourney. So we get there about 6:30 and she signs up for the tourney. I go to the front desk but there is no Omaha game going. Apparently the only one they had broke up around 5. So my choices were to play low limit hold em which was not really turning me on, playing a NL game with blinds of .50 and $1 which is about the max I want to play at right now, or play in the tourney. Reluctantly I signed up for the tourney.

Early on it looked like I was gonna have an untimely exit. I didn't get much in the way of cards then finally woke up with AK of diamonds in middle position. A very loose player under the gun pushed all in for about a third of my stack and the guy just to my right called him. I was debating going all in or just calling as I didn't want to have this guy on my right in the hand. He was also kinda loose and very aggressive. I decided to call as there were a number of people to act after me and it was still pretty early in the tourney. I didn't want to go all in and have someone wake up with KK or AA and knock me out right then and there. Well everyone else folds and the three of us see a flop of J-9-4 with 2 diamonds. I'm hoping the guy will check but of course he punches in a big raise. I think for a minute cuz I really want to see another card but I don't want to put in most of my chips on a draw. So I fold and of course a diamond hits the turn. All in was playing Ace Rag (of course) and my nemesis had QJ. Really wish I had reraised preflop when I saw that. But I have found I have much better results playing conservatively early. I tend to go out when I don't. Like 2nd hand. But I digress. Anyway, he gets his in the end.

A little later on I get involved in a hand with KQ suited. Guy in middle position raised 4X. I am in the big blind. Guy has not played many hands so I'm giving him credit for a hand. Flop is Q-4-2 and I lead out for a little over half the pot. Original raiser calls. All else folds. Turn is another Queen and I check as does he. River is a 10. I push in and he calls. I figure AQ for him but no, it's Q9 and I rake a real nice pot. I am pretty surprised cuz he had played pretty solid. Now he's shortstacked after raising a Q9 then calling all the way with it. And it's still pretty early. I continue playing my tight way and watch the guy to my right buying some pots and playing some crap but getting lucky. He gets into it with another big stack who has been playing a lot of hands and I thought I saw a tell on him the way he bets. I put him on complete air and he bets the guy off the pot. It was just the way he put his chips in, which can be a major tell according to my reading. I have been putting it in practice with some success. So I'm in the big blind when he raises 6x from the small blind. I have 5-5 and want to come back over the top but decide to call and see what happens. As do 2 other guys. Flop is 6-3-2. My nemesis bets 2K and with about 5K left my choices are all in or fold at this point. Well I don't put him on a set as he would not lead out for that much. I really put him on a middle A like A9 or 10 or maybe a KQ. I push in, everyone else folds and my nemesis thinks a long time which makes me believe he might have A2 or A3. He finally calls for a big chunk of his stack with A6. Which sucks for me until the river is a 4 making my straight. Man he was very unhappy. He had been pretty annoying to the whole table and this shut him up which I could tell made everyone pretty happy all in all.

Later on he raises with 3-3 and I reraise him just about all in. He pushes in and hates to see my QQ as I take him out. I start to go on a bit of a tear, getting some cards but also making some good reads and laydowns. Our table breaks and I need 2 racks to carry all my chips to the new table. Unfortunately most of one rack is green (25) chips but still. One guy jokes I am now the green chip leader, which I am actually but I still am one of the top 3 or 4 in chips in the tourney. My 2nd hand I get 8-8 in middle position. The guy to my right calls and I raise him up 4x which makes him very unhappy. Most of the table folds but the big blind pushes all in. Guy to my right folds and I call. Guy on my right is very unhappy when 2 aces flop. Guess he had an ace. My opponent on the other hand only had 4-4 and did not improve. Another knockout. If this was a KO tourney I would have done very well this time. Usually I don't do well in those type of tourneys. People start falling quickly and before I know it we are down to one table. I only knocked out one more person, luckily not my wife who ran her JJ into KK when she was getting pretty short.

Final table was fairly uneventful for me. Did not pick up too much in the way of hands. Kept my stack by going in aggressively in the right spots and made a couple of laydowns that helped. Got unlucky a couple of times when my better hands did not hold up against 8-6 and 9-6 but regained my stack. We got down to the bubble and the guy to my right and the guy across the table from him (who I almost knocked out twice) keep tangling and taking pots from each other. Finally one of the other guys takes out the guy across the table and we're in the money. Right before we break again I tangle with the guy to my right. I only have 7-4 of clubs and the flop is AQ5 with 2 clubs. He checks, I bet and he calls me. Next card is a blank and he checks again as I check back. Last card is the 2 of clubs. He bets 4K and I call him as I was afraid he might have the bigger flush. He didn't even see the flush. He had been drinking kinda heavily. I shoulda raised him all in, he probably would have called me. I did take quite a chunk off him though which crippled him and he was knocked out soon after. At 3 handed I cannot get a hand worth playing. Guy to my left kept raising me when I was small blind. This goes on for quite a while and it's getting late. Finally I get a playable hand with A10. I call, he raises, I push in and he calls with AJ. Neither of us improve and I'm out 3rd. I was unhappy but mainly just unlucky I finally catch a hand when he had a better one. Otherwise, 380 was a nice payoff for 3rd place in a small tourney.

So that was my weekend, more profitable than most I do admit. Now as Big Joe said to Oddball in one of my favorite movies (Kelly's Heroes) "Stay lucky you nut." Which sums up my view on the poker table.

Nice Cash! Why haven't I been reading your blog???? Gotta make up for lost time!