Come to think of it, I'll put it all on the 7 horse 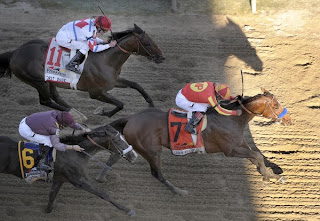 Good morning all
The picture says it all, too bad I didn't do what my titled suggested and bet big on Lookin at Lucky in the Preakness yesterday. Of course as the second favorite, I wasn't going to make a ton betting on him anyway I when I bet horses, which is not often, I do look for value in my bets. I did have a nice exacta going with the number 6 horse Jackson Bend with Lookin at Lucky which missed cashing by a nose. If the race was a little longer, Jackson Bend overtakes the 11 horse First Dude and I cash a decent ticket. As it was, between my different wagers I ended up losing $6 when you deduct my winnings ($5 on 7 to win and a $2 show on Jackson Bend) against my bets. Still when you add my Derby and Preakness winnings against bets, I am up over $40 which beats the alternatives.

So after I got to Derby Lane and placed my bets, I thought I would play some Omaha Hi/Lo while waiting for the race to go off. It was a struggle early as I did win one smallish pot but then got rivered twice in a row to lose hands the put me down $30. I kept to my guns, stayed tight and hit a few pots. There were a couple of real fish playing and one guy who hit quads twice in the first couple of hours I played. I am still waiting to hit quads. The quads guy didn't play badly but he did see a ton of hands. The thing about consistently winning Omaha is to not play very many hands, play even tighter than you would in holdem because most flops hit you close enough that you can often times justify staying in the pot and spewing chips till the river. Your occasional wins won't make up for all the extra bets you put in there. At least it doesn't for me. Let me illustrate with probably my best hand of the night.

I am dealt AA44 with an A-4 of hearts and clubs in the big blind. Pretty good hand. I don't raise as that usually lets people know you have AA and I don't want to advertise that if I can make a boat in the hand. If I had A244 with the ace suited I would have raised it in that situation. Anyway the flop is 3-5-9 with the 3-5 of hearts. I lead out and get called by 4 people. Turn is the 7 of hearts giving me the nut flush and second best low which is very nice. I bet again and get 3 callers. River is a queen of clubs which helps no one. I bet again and get 2 callers. I scoop the pot with the A-4 low and nut flush. The two callers have King high flush and Queen high flush with A6 as their best low hand. Omaha is a game of nuts, playing second and third best hands will oftentimes get you killed.

By the time the table broke up I was up most of my buy-in and that was only because I lost a bit at the end when I didn't make my monster draw. I made a number of laydowns where I wasn't best or wasn't drawing to the nuts and which saved me some cash. Guys next to me on either side both rebought while I was there. And I didn't make any monster hands, didn't hit a lot of draws or anything but by staying fairly tight I was able to minimize my losses so I didn't have to have huge wins. And I had a good time talking to guys who mostly are 20-30 years older than me. Might go back again today as the wife was too tired to play when she got home yesterday afternoon and she may want to today.

As my wife always tells the kids when they go off on their own, make good choices boys and girls.
Posted by The Neophyte at 8:31 AM