All Hail the Poker Queen

I just noticed I started this post a month ago and never completed it.  Sorry for the delay and I'll  be posting more soon.

If you're like many guys, especially guys in a relationship, Valentines Day can be a very trying day.  Some women demand we prove our love to them on Valentines Day.  Many women want flowers, a nice dinner, chocolates or jewelry on Valentines Day.  And if she can show it off in front of the girls at the office and make them jealous, that's even better.  The holy grail is a delivery at work.  It's her way of saying "See, my man truly does love me" to all her co-workers.

I am a luckier man than most.  My wife is not like that.  Perhaps after 30+ years of marriage to me, her expectations have been tempered some.  Or perhaps she is a woman who truly knows what she wants and what is important to her.  And on Valentines Day, chocolates, flowers and a fancy dinner are not really important to her.  No, what truly says romance to my wife on Valentines Day is POKER.

I'm sure I've mentioned before that Derby Lane holds a couples tournament every Valentines Day.  And they don't wait for the weekend to play the tourney, whatever day it falls on is the day of the tournament.  Which means if one of us stays in for the whole tournament, it's going to be a bit of a late night before going to work the next day.

The tourney started at 7pm, so I did take the PQ out for dinner before we headed over to Derby Lane.   Being the romantic guy I am, we decided to hit the Village Inn near the track for dinner.  If you aren't familiar with Village Inn, it's a slight upgrade on Dennys with some really good pies.  The whole restaurant screamed love and romance.  Well not really.  But we had a decent quick dinner and headed off to the track.

When we got there we noticed it did not seem like the tournament was going to be too full.  While we were about a half hour early, there just wasn't that many people hanging around.  The tourney usually has 50 couples in it but there was no where close to 100 people there.  As it turned out only about 30 couples ended up playing in the tourney.  That was a little disappointing.

The structure of the tourney is like the typical no limit hold em tourney except there is a time limit.  At a certain time they call last hand and the tourney is over.  It usually lasts between 3.5 and 4 hours.  After the tourney ends they combine the chipstacks of each couple remaining - if one is knocked out then you just count the one left - and declare winners based on chip counts.  You get a fair amount of play for your money as it was 15K to start and 20 minute blind levels but after a couple of hours with the blinds and antes getting up there, you gotta get something going.

Well the tourney did not start out great for either the PQ or myself.  I was down a couple of thousand early and she was too.  Neither of us were getting too much to play with and only a lucky straight kept me around my starting stack for the first hour or so.  We got a break about 2 hours in after 6 levels. I was lucky to make a hand right before the break and actually got to the break with 22K.  Not great but better than I had been doing.  The PQ was in much worse shape as she was down under 10K and just not getting anything.  But she was staying in and not playing foolishly.  I talked to her after the break and told her we both would need to get aggressive if we got playable hands and try to build some stacks.

Well in my case, that was not meant to be.  I hung on for another hour but without much to play or luck, I watched my stack dwindle.  I did manage a couple of opportune steals but that wasn't enough to offset the blinds and antes for long.  At about the 3 hour mark I pushed in with 99 only to see the gal next to me flip over KK and my tourney was over.

To my amazement, the PQ was still hanging in.  She still didn't have a big stack but she had managed to double up and was being patient while waiting to pick her spot.  But I knew even if she made it to the end of the tourney, she was far to short stacked to get into the money, especially without a partner.  Last year when we played the tourney, I had done pretty well but she was short stacked for a good part of the tourney.  I kept my stack and even added to it and when the time limit hit, I had a decent amount of chips.  But not enough to get into the money I thought.  But she was still in the tourney as well and had done quite well after the break to build some chips.  She had only a little bit less than I did and our combined stack was enough for 3rd place.  But this year did not look like it would be our year.

I was sitting in the bar near the poker room watching the play and messing around on my Ipad while the PQ decided to do something about it.  We knew the tourney would end soon and she had to take some chances.  She got aggressive and made a nice double up but was still one of the shorter stacks, especially since it was down to one table and two of the ladies from my table were sitting there with big stacks.  The last hand comes around and she decides to push it all in with KJ .  4 others called but she flopped a king and took down the hand for a massive pot.  She went all the way from 6th or 7th  chip stack to 1st in one hand.  And that's how the tourney ended.  When they totaled everyone's chips, ours were number one.  Thanks to her.  I'd like to think I helped but it was not true, it was all her.  She kept patient, picked her spots, got a little luck, and took down the tourney win.  Needless to say it was a good Valentines Day for us, maybe not quite as good as the one in 1984 when I proposed to her, but still a damned good night.  So all hail the Poker Queen, Valentines Day Poker Champion! 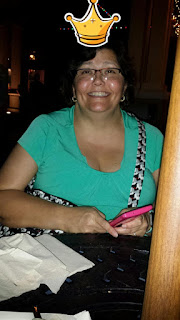