It's That Time of Year

It's that special time of year again.  Yes it is the middle of summer but here in Florida, the middle of summer runs from May through October so that's no big deal.  The WSOP just played down to the final 9 which is pretty special, at least to those nine guys.  BTW how incredible is it for Mark Newhouse to make the final table 2 years in a row.  I thought Dan Harrington's run in 2003-2004 was pretty special but he only had to deal with fields of 800 and 2500.  The last 2 years have had 6300 and 6600 players.  So hats off to Newhouse. 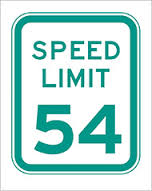 No the special thing is of course, the anniversary of my birth.  A little before midnight on July seventeenth, Nineteen hundred and too long ago, I made my presence known to the world.  The PQ would tell you I haven't stopped making noise since.  She's probably right.                            .

Thursday was the actual birthday and my wife surprised me by taking me to Bern's Steak House in Tampa.  If you've not heard of Bern's or have been to Tampa but never been there, let me recommend it whole heartedly.  It was recently ranked the #2 steakhouse in the US by Daily Meal but hell I can't judge that.  I've been to a grand total of 2 high end steak houses, Berns and Don Shulas.  But I will say the 2 times I went to Bern's were without a doubt two of the best meals I've ever had.  Just go there prepared to spend a bit of time there.  It's not a dinner you eat, it's an entire dining experience.  The choices are many, the beef is tasty and tender, the sides are delicious (the PQ even ate and loved the carrots and that's not something she normally does) and the wine list is enormous.  They have their own farm and grow a lot of the veggies they serve.  For first timers I would heartily recommend taking the tour of the kitchens and wine cellar, an enjoyable experience.  Also make sure to tell your waiter you want to hit the dessert room as well.  The entire upstairs of the restaurant is a dessert room with many choices of high end desserts, cheeses, and liquors.   Here was my dessert, carrot cake with hazelnut ice cream and warm hot fudge sauce on the side. 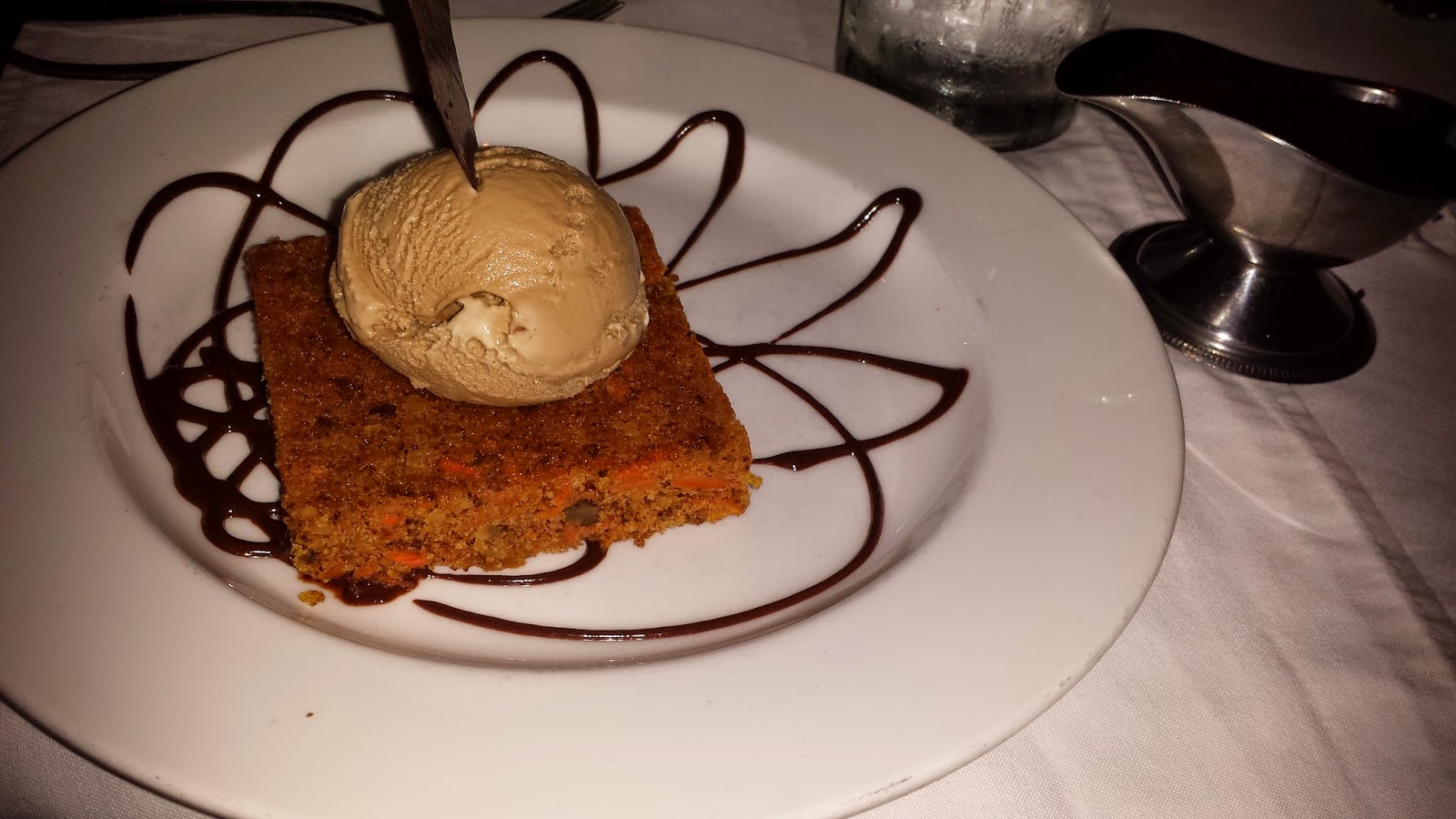 We had the NY Strip for two.  2 inches thick of fabulous tasting choice beef.  We also added an order of mushrooms which had to be the best tasting mushrooms I have ever had.  And as good as these were, I made an even better decision to order some Port Wine cream sauce.  OMG I could have sat there and just drunk the stuff.  Next time I'll get two or 3 orders of it and pour it on everything.  Holy guacamole was it gooooooood.

So tonight we're doing the actual birthday celebration.  We'll have about 12 people over for Chicken Bog.  My younger son is bringing over a smoked pork butt and my daughter made a delicious looking german chocolate cake.  The house is smelling delicious.  And surprisingly I'm hungry again.  Shocking after that last dinner.

Not much else is happening here.  Work, eat, sleep, repeat.  We did make reservations for Vegas in November as part of our 30th anniversary celebration.  I'm definitely looking forward to that.  I went and played a bit of poker a couple of weeks ago.  That did not go well.  Bad cards and bad results.  Managed to lose a set to a straight draw when this lucky chick went on a tear and had the deck hit her upside the head.  45 offsuit and of course she turns the straight.  There was one guy constantly raising hands to my right so I opened up my range but all it did was cost me.  Suited connectors, small pairs, good cards, it didn't matter as I couldn't buy a flop to help me.  Then one hand I finally get KK.  He of course raises it up.  I reraised him and he pushes me all in.  I seriously doubt you have aces sir so I call.  He has A 10 and of course rivers an ace.  Nothing helps me on the flop or turn so I gave up after that.  Sometimes poker really sucks.

Well time for dinner so I'll finish this up tonight.  Time to be my usual charming self.

Or actually finish it up tomorrow.  Happy Sunday morning.  I'm doing the rest of this post in between cooking breakfast for the PQ and our daughter.  BTW if you love bacon, you have to try baking it rather than cooking it on the stove.  All you do is take a baking sheet, put a sheet of parchment paper on it, lay the bacon on it then put it in the oven.  Then turn the oven on and set to 425.  Regular sliced bacon takes about 17-18 minutes and thick sliced is about 21 minutes.  Comes out perfectly done with very little mess.  The oven doesn't even get to 425 before it's done except for the thick stuff.  I never cook it on the stove anymore.

I had a good birthday with a lot of laughs and hey isn't that what you get together for?  I have no blood relatives here so it's all my wife's family plus my boy's girlfriends but I get along with them all pretty well and they seem to have accepted a conservative Yankee in their midst - at least I give them someone to argue with and try out the George Bush jokes on.

We got a dog a couple of weeks ago.  I don't know if I mentioned but our old dog Izzy had to be put down.  She had a tumor wrapped around her intestines.  I was not ready for that nor was the PQ.  But she didn't suffer at least.  She did leave a bit of a void in our life but we delayed getting another dog because of the cruise we were gonna take.  Well a few weeks after our return the PQ and Betty Crocker (BC from now on, she got this nickname at work because of all the goodies she has baked for them already.  My daughter definitely knows the way to people's hearts lol) found a rescue dog on a website and decided they wanted him.  We actually got his brother I think and he's a good dog.  Terrier/Maltese mix.  Pretty calm but likes to run around some as he is only 3 years old.  He was in a hoarder's house and I think he may have been abused by a man because he doesn't warm up to most men easily.  But he's good with me now and we have fun.  Last night I was reclining and he jumped on me and sat on my shoulder like he was a parrot and I was Blackbeard.  His name is Mico but my wife has given him two names.  Stinker and Mico You Little Shit. 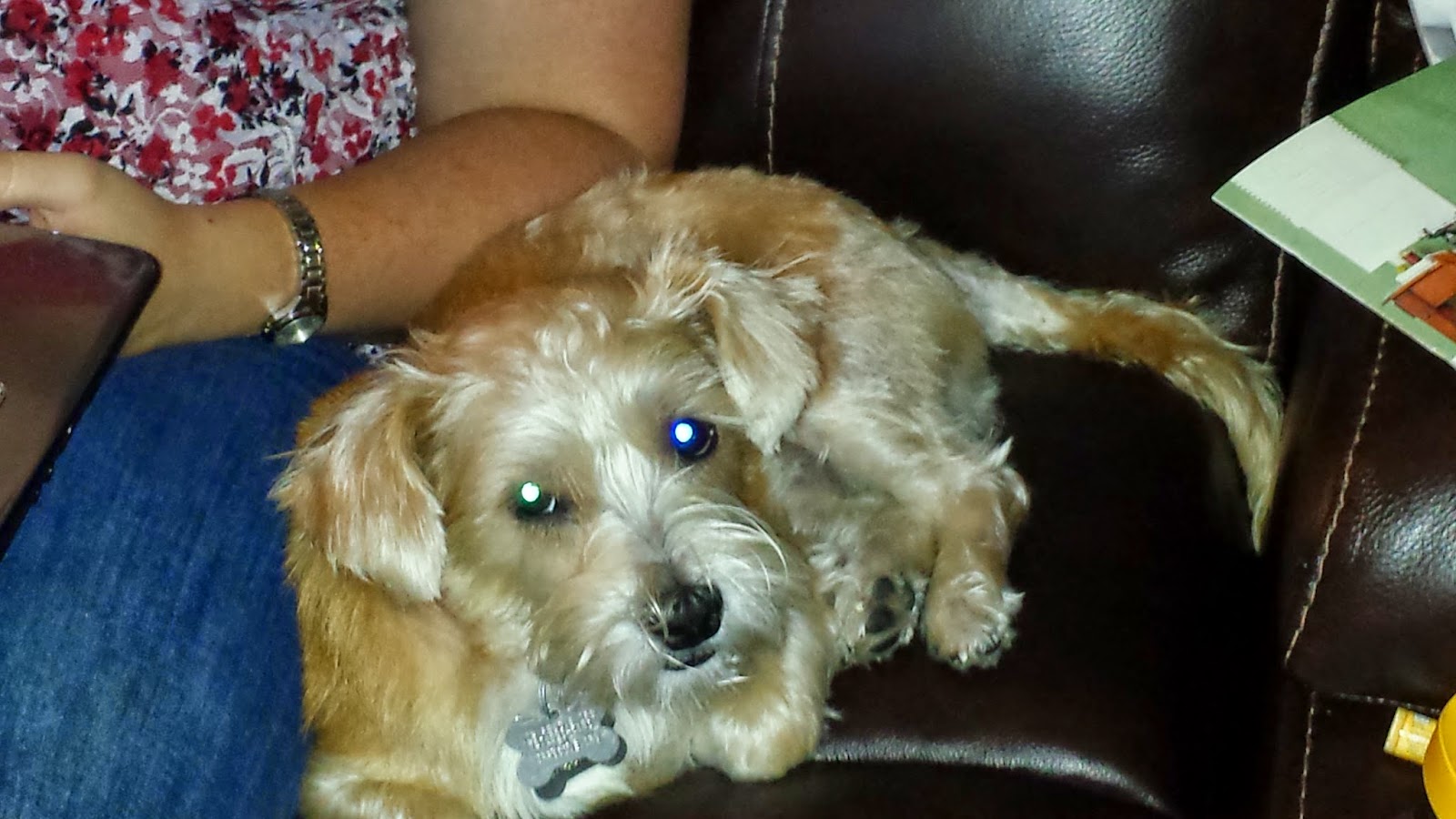 Last weekend I decided to do a big breakfast for all of my family and their girlfriends.  We had some biscuit mix to make the Red Lobster Cheddar Bay biscuits (OMG they are so good) so I made a batch of biscuits and gravy along with some eggs for those like my daughter and wife who don't like biscuits and gravy.  And they're supposed to be southerners.  Me, I never had biscuits and gravy until I was in my 20s.  It definitely is not on too many New England menus.  My younger son - who is turning into a pretty good cook himself not to mention a fantastic meat and cheese smoker - said to me while I was hard at work, "Let's see if your biscuits and gravy are better than mine."  A little later he grudgingly admitted that it was.  Thing is we both use the same recipe we pulled from the Pioneer Woman's website to make our biscuits and gravy.  I told him that's because my version was made with love because when your parents feed you they're really saying "I love you."  Not sure he bought that.

Last night we were talking about Vegas, specifically how the women in Vegas tend to dress.  I was explaining to my sis in law that she needed to check out the legendary "Slut Parade" at the MGM next time they went to Vegas.  I told them a bit about some recent posts by Rob Vegas Poker (known as Boob Rob in this house after the PQ coined that term for him last year) and they got a good laugh at the EDC stuff not to mention how the clubgoers dress sluttier than the "working girls".

Ran across this story yesterday here about a guy who beat the living crap out of an 18 year old guy who was having sex with his 11 year old son, then the dad called 911 to let them know they could come collect the POS from his living room floor where he left him unconscious and bleeding but still alive.  The Daytona Beach cops who showed up got Dad's story and declined to arrest him and the city chief of police basically said he could see nothing wrong as a cop or as a father with how the guy handled the issue.  According to the PQ who has over 25 years experience with the courts system, because the boy was under 12, if the rapist is convicted as charged he will get life for this little bit of deviancy.  And he should.  So I went to the Volusia County jail to see his booking photo.  Now I know what "beat the shit out of" looks like in real life

If this occurred to more of these people perhaps this would happen less often.  Perhaps not but then again I bet the victim's families wouldn't feel so helpless while the offender sometimes gets a slap on the wrist, especially if it's their first conviction. But I know in many areas the dad would have faced worse charges than the criminal.

Well time to end this missive before some readers mistake me for the immortal Boob Rob.  I hope everyone is having as fine a weekend as I am and I want to make sure I send some healing vibes to Lucki's mom.  Being a cancer survivor myself, I know firsthand how scary it can be.  And mine was no where near as serious.  Also I'm glad to see Gary (aka The Crafty Southpaw) is getting better and better.  He is an inspiration.