Wednesday in Vegas we got up early.  Our plan was to start off my birthday with a trip to The Wicked Spoon in the Cosmo for breakfast.  We had never been there but heard good things so it seemed like the perfect way to start out the day.  We were not disappointed.

First off the Cosmopolitan is a beautiful facility, puts even most other strip casinos to shame in terms of looks.  You have to go up to the 2nd floor for the buffet.  It was everything it was advertised to be.  I thought Bellagio had more diverse offerings but as for freshness and taste, The Wicked Spoon was definitely tops in it's class.  When you can put out individual servings of biscuits and gravy and both keep them hot and not let the biscuits get hard, you're doing it right.   It was a bit pricey at $25 but I would recommend not passing it up when you get the chance to go. We did not leave there hungry, that's for sure.  One thing we noticed there were certainly a lot of families there with kids and it seemed a lot were foreigners.  So maybe Cosmo really appeals to the European gambler.

Sorry folks, time for a rant breaks.   Nothing pisses me off more when I am in Vegas, especially at casinos, than to deal with kids.  Teenagers, little kids, doesn't matter.  Vegas is really not designed for the kid element and personally when you have people walking around drinking alcoholic beverages, doing stupid things, etc, it just isn't a place where little kids fit in.  Even teenagers but especially little ones.  How much do these casinos provide for kids to do?  Now I can't blame the foreigners that much, they really don't understand Vegas and perhaps it's part of a bigger trip going a bunch of different places but Americans do know Vegas and it's nearly criminal for them to bring little ones to Vegas.

I know when they were in your early twenties, Johnny and Mary Sue partied like rock stars in Vegas and soon got married.  They had careers and delayed having kids until they were pushing 30.  Now in their mid 30s with 3 kids aged 5, 3 and 1; they think Vegas is the place for them to go have fun and recapture the magic.  Maybe that's true but here's a tip:  DON'T BRING THE KIDS.  I don't want to deal with your little brat crying about this and being bored  because it's illegal for you to put a twenty in a slot machine for them.  Too many people think that these vacations are for them.  No they aren't, they are for the kids.  Go somewhere kid appropriate.  Disneyland, Disneyworld, any one of a gazillion national parks that are in the area, a beach somewhere.  Come on aren't there enough places in the world that are just aching to take your money and entertain your kids for you that you don't have to drag them up and down the 110 degree strip??  Please??  I do remember when my kids were young and I may have not been overly thrilled some times but we spent a lot of vacation time at beaches, Disney themed places, and the like and not one of them in Vegas.  In fact the PQ and I didn't even go to Vegas the first time until we'd been married 20 years.  Now yes we are a little late to the scene often times but then we didn't bring the kids either.  And the boys by then were adults and even the little girl was 11 or 12.  She easily survived staying a week with her cousins.  So for the love of God people, stop being insensitive assholes and take your little brats someplace they'll enjoy and not where I go so I can GET AWAY FROM KIDS.   OK  Rant time is over.


After breakfast a little gambling was in order.  It was early so not much of a crowd at the tables and the machines.  Maybe I need to experience the Cosmo with a big rowdy crowd.  Of course I don't know if I'd ever see that.  The place was kinda hoity toity for my tastes and the casino floor was just kinda dead.  I don't know maybe it was too early but I just didn't feel any soul there.  Most of the staff didn't really seem overly friendly either.   Then again maybe if I had a Rolex and wore a linen suit they may have looked at me differently.  I played some craps poorly and lost enough to feel glad to get out of there.

We took the long walk across Harmon to the Aria to check it out.  And for being right next door, it was a looong walk.  We checked out a few games and such and signed up for the $125 tourney at 1pm.  That was a good tourney.  Apparently my karma from the night before transferred over to the tourney at least for a little while.

Early in the tourney I raise to 200 with AK off in early position.  Only 6 callers.  Flop is KQJ all diamonds.  Not terrible since I'm sitting on the diamond Ace but I'm not going wild with TPTK on that flop.  So it's checked to me, I check and surprisingly everyone else checks too.  Next is a 2 of hearts.  It's checked to me again and I put out a bet of 700.  And 3 people call anyway.  I'm really wondering what I'm up against and why no one is raising me.  Makes me think everyone is on a draw and I may even be ahead.  When I see the 10 of diamonds hit the river, I no longer care what everyone else has.  It's another royal flush.  I can get used to seeing those.  It's checked to me and I put an immediate 3000 bet out like I want to steal.  Kid in a hoodie to my right immediately moves all in.  Can you say Cha Ching?  Then it gets across the table and the next guy goes into the think tank.  Oh is he really thinking of calling here?  I try to make myself as invisible as possible and just sit a little away from the table, like I'm not even involved here.  It kind of works as the afterwards the guy tells me he wasn't even considering me still being in the hand, he was only considering the kid in the hoodie. 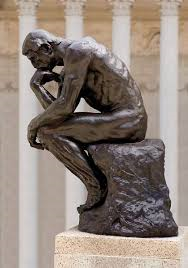 After 3 or 4 minutes a guy calls the clock on Rodin and as the supervisor counts it down he eventually decides to go all in as well.  Bingo.  Guy to my right folds and I verify with the dealer that it was an all in and a call already.  Then I immediately push in and flip over my AK for the royal.  I had them both covered by a little so I almost tripled up to 30K. 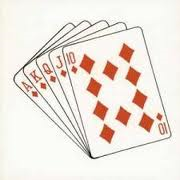 From there it went downhill.  I made a huge mistake when I thought a guy was making a move on me and pushed back with JJ.  Yeah he made a move.  With AA.  No help for me and I lose half my stack.  I got most of it back not much later when I called Rodin's all in push (he rebought after I knocked him out the first time and was reseated right next to me) with AK and he only had A10.  He didn't improve and I took his chips again.  But after that I couldn't make anything happen and I missed my chance to use my big stack to bludgeon people earlier.  Eventually I got moved to a new table where I ran into a real buzzsaw and again ran into AA when I hit top pair.  Good night for me.  Out of 110 I finished 35.  The PQ on the other hand was on the short stack nearly the entire tourney but out lasted me and made it to 30th.  She played well.  For me the best thing I did was sit there while the massage the PQ bought for me was pounded into my aching back.  Oh was that a nice birthday present.  Thank you baby.

We got out of there around 7 and headed down to Silverton for the big drawing.  We both had a number of entries in the drawing but neither of us were among the 10 names drawn.  We played for a while but the magic was definitely gone and we ended up heading back to Ballys disappointed for the day.  Still it was a good day, just not a great day.  Then again most days cannot be like the day before.

Well I was going to try to finish the whole trip up with this post but it was not meant to be.  So I guess another post will be in order later today or tomorrow.  Slacker that I am, I just don't have Rob's ability to put out mega posts and get everything in them.
Posted by The Neophyte at 4:01 PM

Two all-ins and you have a Royal - doesn't get much better than that!

Agree about kids in Vegas, really hate that.

Awesome getting that Royal and having two all ins in front of you. Since they were all in they should have had to have shown, what did they have?

But sad that you weren't able to use that as a stepping stone to cashing.

Two Royals -- man. Nice that you got one on the machine and it paid off. There are certainly less high hand jackpots now that Caesars Entertainment has been running its bad beat jackpot promotion. When I rivered a Royal at Venetian a few trips ago I at least got paid off on the hand, but I wanted a bonus!