X amount of hours, and still counting.  And boy am I ready.  Bought a few things I needed for a good vacation like clothes, a bathing suit, and a new pair of tennis shoes.  I know I bragged about mentioned a while back how I won a new Ipad which I am truly loving.  It's much easier bringing a tablet like that on vacation than a whole laptop however in the interest of perhaps posting a time or two in Vegas I thought I would need an input device.  Found a nice blue tooth keyboard for Ipads online at a big discount so I scooped that up to take with me.  With any luck I'll have time to crow about any big scores or eat crow over bad losses.  Since it is Vegas I expect more of the latter than the former but hey, you never know.

Not much else has been going on.  I have played a bit more poker but not overly successfully on the Omaha tables.  2 weeks ago I had a nice session at the Hard Rock almost doubling up on my buy in but this week I played twice at Derby Lane to not so good results.  Last Saturday was the most frustrating.  I am at a table with a usual assortment of oldsters, and I'm watching these 2 women across the table just play absolute garbage cards and get rewarded.  One is a long time player who I know will play any 4 cards but that night, the deck just kept hitting her on every hand.  Even when she lost she ended up winning.  She flopped 2 pair with K-J-6-3 when the board comes out K 7 3.  She bets it like she has top set.  She doesn't improve her 2 pair but makes a straight when the turn and river are 4-5 and takes down the whole pot because no one had a better low than her.  I never really tangled with her because my cards were just too sorry most of the time.  And she is pretty good at reading where she is but I know I can sandbag her if I ever hit.  The gal next to her was even worse.  She hadn't played much Omaha and anytime she got trips she figured she was good.  I tossed top set of Jacks one hand on the river when the lady next to her bet, she raised, and the board had too many draws for me to stay in.  Turned out she rivered a set of 3s and figured she was good.  Which it turned out she was.  I was PISSED.  But I didn't go on tilt much as a wanted to.

That was the way my night mostly went.  I river top full house with no chance of losing to quads but I did lose to a straight flush.  The lady next to me was just as bad as the ones across the table.  She folded the grand total of ONE hand preflop and that was to go to the bathroom.  Raised, kill pot, didn't matter.  She caught a number of hands as well but not like the one lady across the table.  She did get me with the straight flush while the guy to my right makes quad queens to beat my nut flush.  That kind of night.  I was down 2 buy ins but kept it together, avoided playing crap hands and started to come back.  I did manage to take a couple of pots away from the lady to my right.  Playing good cards usually means you make better hands.  Played a high hand where I made the nut straight against her lower straight.  Never hit another full house or flush but made some half pots and got myself up to down 60 bucks.  Almost a success in my book.

Wednesday the stock market closed early on the day before the holiday so I was able to spend a few hours playing cards in the afternoon.  Many of the same players, some different.  Same old luckbox across the table from me, still making hands like mad.  She just pissed off the guy next to me beating him on 3 or 4 hands on the river.  It got so bad I thought he might throw something at her.  And she was not above rubbing it in a little.  One hand she is betting like a madwoman and he is calling her as am I.  I have nut low draw and even though I should have tossed it after a JJ6 flop, a 4 on the turn keeps me in and gives me a straight draw as well so I'm not dropping out but I fear I'm going to get quartered.  She keeps betting into this guy and he keeps calling which makes me think maybe he has her beat and isn't going for a low.  Final card is an 8 which makes my low but not my straight.  She bets he calls her I call and she says trip jacks.  Guy to my right says trip jacks with an ace (she had a 10 kicker) and I show the low.  He's happy to finally take something off her but the dealer looks at her cards and she has a low flush with her other 2 cards.  He is very unhappy needless to say.

I did get one pot off her when I turned the nut low with a pair of nines.  One guy is all in and she has just been calling this time.  River is a nothing card and she finally leads out a bet.  Guy to her left calls and I read this as one of her bull shit plays to push me out of the pot so I raise her up.  I got nothing but the low but she knows I'm tight and she dumps the hand as does the other guy.  I get all of the side pot and half the low.  She gave me a look that time.  Another time she wins like 3 hands in a row then complains when she flops two pair and it doesn't come in for her.  At the time I hadn't won 3 hands total.  Guy next to me wanted to slap her.  I probably would have helped.  I spend most of my afternoon down 50-60 bucks but come back at the end and go out down 30.  Thought I was gonna get it all back and then some but ended up splitting one hand when another guy made the same straight I did and got my nut low quartered on the next hand.  Instead of making another 50 bucks I made like 5.

I wasn't overly unhappy with my play though my luck was pretty piss poor.  A ton of lousy hands and when I had good hands I got lousy flops while I watch other people parlay garbage into hundreds of dollars.  I just had little luck and in the short term, luck is a much bigger factor than skill.  The PQ has also not been overly lucky on the video poker machines either.  But she figures to turn that around in Vegas as well.  Not to mention 3 card poker.  I have no doubt she will either.

While we haven't been overly lucky in the gambling lately we have done well in other places.  Outside of my scoring an Ipad, the PQ recently scored one of these for free. 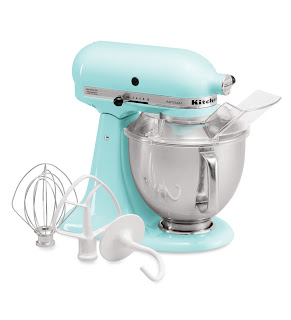 Also I have managed to score a promotion along with a pretty nice raise that all went into effect on July 1.  And just in time for vacation I should be getting a nice little bonus which will come in very handy where we're going.  All in all things are looking pretty good.

For July 4th, the wife and I headed over to Orlando to visit our daughter and share a breakfast.  I believe I mentioned Hash House a Go Go opened a house in Orlando which we hit up for dinner a month or so ago.  This time was breakfast. 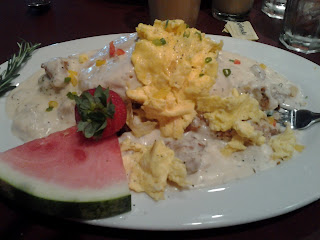 Biscuits & Gravy, scrambled eggs, some fruit and underneath it all in true Hash House fashion are the grilled mashed potatoes.  I made a valiant effort but could not finish it. I pronounced myself ready for Vegas now.  I'll take another crack at the Hash House then.  As well as the Bellagio, Wicked Spoon, and the Peppermill.  Oh yes I can hardly wait.  Well all this food talk it making me hungry.  Time to grab some dinner.  T minus 7 days, 3 hours, and 23 minutes.

Save your good luck for Vegas!

I have not even gone to Hash House, Wicked Spoon or Bellagio my last few trips. Getting a freebie Buffet of Buffet pass took care of my need to gorge in June.

As for poker ... I have done really well the past two trip at Luxor. Regs are easy to spot and play tighter than tight and thus are easy to avoid, and the other players were average at best.

If you are looking for some fun Omaha, I suggest Sam's Town or Suncoast. Pretty friendly rooms. You'll be among the youngest at the table.