Oh what a feeling.  Actually getting hit by a car (it was a VW bug) hurt like hell and my parents nearly had a heart attack when it happened.  But that's all in the past.

Monday in Vegas dawned bright and clear and warm.  About how it does for 5 or 6 straight months I imagine.  We decided to do a bit of downtown gambling to start out our day.  Back before we really got into video poker we went downtown and played and turned a bad trip start into a damned fine trip ending.  We were hoping to kick start it again. 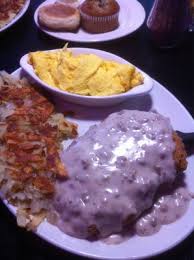 We started our day with breakfast.  You have to start with the most important meal of the day and when we're in Vegas we do it up in style.  Most days we don't grab lunch as breakfast tides us over until dinner.  This was no exception.  Off to the Peppermill we went.  I usually have the chicken fried steak and eggs as I am a sucker for good cream gravy but this time decided to change it up.  So the PQ had the chicken fried steak and eggs instead (I had a couple of bites of course) and I got a dish I'd never tried called Munch's Breakfast.  Here is what it had: 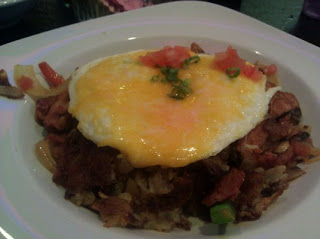 Sautéed peppers, onions, linguica sausage, mushrooms and tomatoes, stirred into our hash browns, topped with three eggs any style and finished with Cheddar and Jack cheeses, served with toast or muffin
Doesn't that sound good?  It sure tasted good.  It looked so good that the guy at the next table asked me what I was eating and ordered it for himself.  Personally I can't get linguica too often here and I really grew up liking it when I lived in Rhode Island so it was really nice to get it for breakfast.  Then after valiantly failing to finish our breakfasts it was out to the car and downtown we headed.

We drove right past the Pawn Stars pawnshop but with a line outside and nearly 100 degrees on the thermometer already, we decided to pass on that one.  We parked in one of the garages and walked onto Fremont St.  First stop the D, formerly Fitzgeralds.  About 5 years ago we hit the video poker machines here for some major scores.  Funny thing  was, these were kinda old machines and actually paid off in quarters.  We quickly learned that 200 dollars in quarters filled about a bucket and a half and weighed a good bit.  But it was fun to learn, believe me.  That kick started the rest of the trip that resulted in the PQ hitting a royal flush at Casino Royale later in the week.  Definitely a fun time in Vegas.

While they still had a few old machines around, the PQ contented herself playing more up to date ones.  I was not in the video poker mood and decided to take on the 3 card poker game instead.  Eventually my luck would turn on that game.  NOT  The dealer killed me, every good hand she beat.  I never got a really good hand and quickly lost a chunk before deciding to bail for craps

Good decision.  The dice were rolling well for me and the guy next to me.  He was showing his girlfriend how to play and racking up a nice score.  I hit pretty well myself.  I heard the guy talking to his gal and he sounded kinda familiar so I looked at him a bit closer and it clicked.  I had seen him before, on a tv show called Baggage Battles.  It's kind of a storage  wars but with unclaimed luggage.  I think it's even tougher to do because you have almost nothing to go on except maybe the weight of the bag and how fancy it might be.  So as he was racking up I asked him and he confirmed he was Mark Meyer of Baggage Battles and was filming in Vegas that week.  We talked a few minutes and shook hands and he wished me good luck.  Hell I'd already gotten lucky almost tripling up on craps.  Meeting him was icing on the cake. 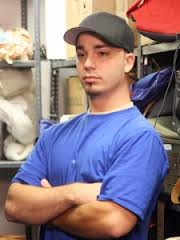 From the D we headed over to Binions.  The PQ had not done well at the D so I handed her some more cash and hoped Binions would treat her better.  Luckily it eventually did.  It took a while but the machines repaid her for her efforts with a few quads.  I even hit one myself.  Then hit the dice again though without much success this time.  We wrapped up with dinner in the café there.  I actually had a salad.  Don't tell Pete Peters but I understand why he had salads in Vegas.  After all the excesses sometimes you just want something a little healthier than a steak and baked potato.

We decided to check out the Rio.  Wow what a load of walking there was in there.  We got to the Amazon Ballroom only to find the players were all on dinner break.  So we hung out at the Rio for awhile, played some video poker and I hit the craps tables again.  Not much luck there and I lost a bit.  The VP did not come through either and we headed back to Ballys disappointed in our gambling for the day.  But after all, tomorrow is another day.

Tuesday we decided to spend some time at Casino Royale.  Right in the middle of the strip across from the Mirage is this for lack of better words, dive casino.  It's not very big, it's not all crystal and light, but we like to gamble there.  The staff is great, the games have low limits, and the treat you nice.  The waitresses always remember my drink (after all how many guys run around ordering Planters Punch all day) and there's always a good vibe there.  We started with video poker right where the PQ hit her first royal flush

I didn't have any luck on the video poker and decided to try craps.  That didn't go so well.  I lost a bit on a very choppy table.  I finally just said the hell with it and went to the 3 card poker table.  For once I didn't lose my shirt.  I didn't win a lot but I wasn't getting killed.  The other 2 guys at the table were hot before I got there but they cooled off quite a bit.  After they left the PQ walks up.  She plays 6 or 7 hands and then pulls a set of 4s.  Of course she was sitting to my right.  Still I have determined that if we are at a 3 card poker table together, no matter where I sit, the big hand will find her.  So at least she cashes out for a good score there.

From there we decided to go to the Silverton Resort off the strip.  We'd never been there before but saw pictures and thought the place looked nice.  That was a great call.  Silverton is west and a bit south of the strip, almost as far down as the South Pointe.  We found it without problem and parked right by the door in the parking garage. 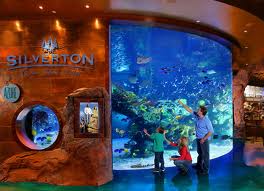 It really was a nice casino.  Had a western motif, kind of what I'd expect a casino in the middle of Montana or Wyoming to look like.  Rustic, a lot of wood, etc.  Not what I expected in Vegas.  The vibe was really laid back and the staff was great, very friendly and helpful.  We got players club cards then played some video poker to get some points for a free dinner.  So we went to the café there and ate dinner which was quite good.  Even split some dessert, apple pie a la mode. 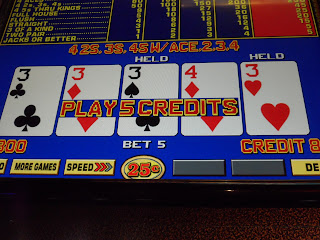 After dinner we went back to the VP machines and then it happened.  I sat at a machine and the Video Poker God looked over and got some interstellar dust in his eye and mistook me for my wife.  His finger came down and anointed me.  All the lights got bright for a second, sounds were sharper, and my vision was magnified.  I put a 20 in the machine and boom, quad 8s right off the go.   10 minutes later its quad 3s with a 4 for a nice 200 bucks.  Then not 15 minutes after that came the big one.  Flopped AJQ of spades, held them and here come Mr King and the 10.  Boom goes the dynamite.  The lights dimmed and time stood still.   Well not quite but you know what I mean.  It looked just liked this: 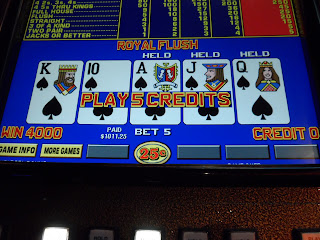 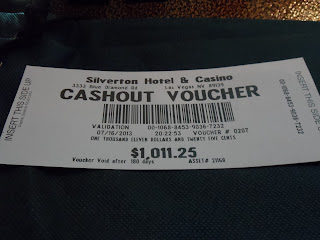 About 10 minutes later I pulled quad 3s with a 2 as well.  In the space of 45 minutes or so I picked up a nice $1500.  Lets just say I was one very happy camper.  I have seen the PQ go on rushes like this before where she hits everything in sight and after having it finally happen to me, all I can say is What a Feeling.

After the magic wore off I decided to play some craps again.  Had a great time, made about 100 bucks and got a bunch of entries into a drawing for $1000 they were having the next day.  The way my luck had been going I figured, why not show up.

We got out of the around 11:30 and headed back to Ballys.  I barely remember the drive, I just kept thinking of that royal flush hitting.  That was probably my best night of gambling ever.  If only every day was like that day.  And it wasn't even my birthday yet.  Happy almost birthday to me.

Congrats on the Royal and nice write up!

So that's what a Royal Flush looks like -- congrats on the scores.

The Silverton was kind of a meh locals place until they did a major remodel a few years ago. Definitely a lot nicer now but still a bit off the beaten path.

Did you notice an empty poker room? There were supposed to open run right next to the Sports Book but it never happened. Still supposed to happen but I have my doubts.

You, PQ and Pete Peters are responsible for the trips I take to the video poker area now. Damn you!