Are we gripping yet??? 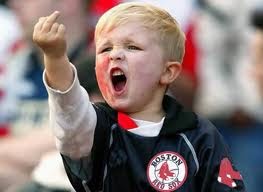 Boston fans are annoying.  Often times very annoying.  It didn't used to be that way.  After all, prior to 2000 there were no recent sports memories for Boston fans to be all that proud about.  They had endured a stretch from the last Celtic championship in 1986 to the 2002 Patriots before a world championship was won in Boston.  And the Red Sox, who have always been the most popular team in Boston, hadn't won a World Series in over 80 years.  Red Sox fans had endured Pesky's hesitation, Armbrister's Interference, Buckners Legs, and enough Curse of the Bambino to choke a horse.   And worst of all had to be Bucky  Dent and the 1 game playoff in 1978.  Ask any Red Sox fan around my age and he or she will probably call him Bucky Bleeping Dent. 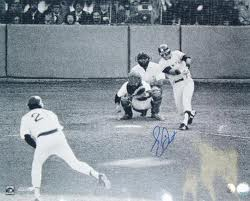 The Sox started out hot that year with a veteran lineup who had just missed winning it all in 1975.  Their biggest rival the Yankees started poorly and after the All Star break the Sox were sitting on a 14 game lead.  People in Boston were talking World Series again.  Then the roof caved in.  The Yankees got hot.  The Sox got cold.  NY came to Boston in early September still down 4 games and swept the 4 game series outscoring the Sox 42-9!  Red Sox fans were freaking out.   A week later NY was 3 games ahead after taking 2 more from the Sox.  But Boston sucked it up and went on their own run to tie the Yanks at the end of the season and force a 1 game playoff in Fenway Park for the AL East crown.  People forget today that Boston had to go 12-2 to make up 3.5 games against the Yanks in the last few weeks of the season.  NY didn't give it to them going 8-5 and winning 6 of the last 7 games but Boston went 7-0 down the stretch to tie the season up.  Only to lose the playoff game, at home, when Bucky Dent and his 5 home runs a year put one over the Green Monstah with 2 on.  I felt for Red Sox fans, I really did.  Hell I used to be one.  Was at work listening to the playoff game on the radio when Dent hit it out.  I still hate the Yankmees.  Always will.

Which brings me to my point.  Red Sox fans in their 20s and 30s didn't live through all the heart ache of fans my age and older saw.  After the fantastic comeback against NY in 2004 and then finally winning a World Series then winning it again only 3 years later, along with the 3 Super Bowls the Patriots won, the Celtics winning the NBA championship, and even the usually underachieving Bruins winning the Stanley Cup this year, younger Red Sox fans have become about as obnoxious as Yankee fans.  The expectations that they are going to win it all and all of their (recent) championship history just brings out the worst in a lot of them.  And man did they get uppity.  Last year all I heard was "Better take your pictures of Carl Crawford in Rays gear now cuz next year he'll either be playing left field for us or the Yankees"  Which is why I am deriving so much joy from the September swoon the Sox are going through now.  When Boston came down here last weekend with a 6.5 game lead for the wild card and left with a 3.5 game lead, I just had to chuckle.  Even guffaw a time or 2.

Now many of the younger set are just shaking it off, saying they're not worried.  After all who do they have to fear on Tampa Bay?  They're just going through a little slump like they did at the  start of the season and they'll get untracked.  But you older folks, and you know who you are, you people are GRIPPING.  You remember Bill Buckner.  You remember Bucky Dent.  You remember how every break seemed to go against you when you really needed one.  I know you're feeling it, I have proof.  The Boston Globe has a poll out now.  See the results here.  Almost 70% are extremely worried and only 6% are not worried at all.  Or check out this blog.  He doesn't seem very concerned does he?

These younger folks, they may not believe it, but they're hearing it from you.  And finally its starting to mess with their minds a little.  Now all we need is for the Sox to totally collapse and their education will be complete.  They will be ready to join you on the Dark Side.  I will be sitting in my recliner rubbing my hands together like Emperor Palpatine laughing my evil dark side laugh.

The Sox are suffering one of the curses of a veteran team, injuries.  Even though they aren't a particularly old team, many of them are not spring chickens anymore.  And the people that are out right now are the ones you cannot replace.  Youkilis, Bedard, Lowrie and most importantly Beckett are all banged up.  Youkilis is important to the team but losing Beckett is killing the Sox.  He does what no one else on the team seems able to do, he stops losing streaks.   As good as Lester is supposed to be, he couldn't get it done when they needed him to.  And right now, they need someone to step up and take control.

Sports like baseball and golf that demand a high level of skill are the ones that also have a high mental aspect as well.  Confidence plays a crucial role in winning and losing.  When you are playing well and your confidence is high, you believe you'll win and you usually do.  When you're confidence is not high, a bad break, a bad call, anything can set the downward spiral going and before you know it you've lost another game.  A lot like poker when you think about it.  Lately the Sox have been living this.  If they don't get out of it soon, it'll be too late.  The Rays went through this in July and early August and only recently have really put it together but now they are loose, they feel good and most of all, their best players are all healthy.  The Beantown natives are getting restless.

My thoughts, 3 games are still a lot to make up in a short amount of time.  After playing Baltimore, the Rays go up to Boston - not the house of horrors Seattle and Oakland often are for them as they are 4-1 there this year - but still they have to go there, then NY then come home to play a good Toronto team and finish with the Yankees.  A very hard finish for them.  If they make the playoffs, they won't have backed in.  So you have to give the edge to the Sox who have 7 more games with Baltimore after the Rays series this weekend.  They do have a series with the Yanks as well and you know NY would love nothing more than to knock out the Sox.  Obnoxious Yankee fans live for those moments.

Personally, I still don't think the Rays get there but the Sox better watch out anyway. If Beckett doesn't get healthy, they could beat out the Rays and still not make it when the Angels sneak into the wild card.  They are also playing good ball now and even though they trail Boston by 5.5, it's not out of the question.  Improbable, yes but not impossible.  I know I'll be rooting for the Rays until the bitter end.  Considering how much I didn't expect the Rays to contend this year, especially after the Manny disaster and Longo's early injury, I have to say I am impressed.  The starting pitchers except for Price, have been better than expected, the relievers have somehow gotten it done with cast offs and nobodies, and the hitting has wavered between timely and putrid, lately timely.  They've done it with good starting pitching and smoke and mirrors but they're doing it.  What a way to finish the season.  If only the Yankees could go on a 15 game losing streak, this would truly be a season to remember. 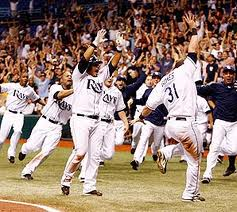 In a sense we are slaves to the era and teams with which we grew up. I cheered for about 100 unsuccessful Chicago professional sport seasons (White Sox, Cubs, Bears, Bulls, Blackhawks) before the Bears broke through and won the Super Bowl. We were treated to the magic of Jordan and six championships. Even the White Sox AND finally the Blackhawks won. That just leaves the Cubs ... sigh.

That Bears Super Bowl victory, however, is now more than 25 years old. Time to fix that!

I always felt kind of good about the Red Sox winning (and recently the Bruins) because of all the fan loyalty that got rewarded. The new generation -- well, they just haven't grown up with the pain to understand.

How did Miami do on Monday night against New England? Oh yeah, they sucked!

One of my fondest memories is A-Rod striking out to end the ALCS last year. It was a beautiful thing :)

I can't understand why Tampa doesn't support the Rays better. They have been competitive the last few years, but whenever the Rangers play there, it looks like the ballpark is practically empty.

Light we are slaves to our teams and when you go through a lot waiting for your team to win, you really appreciate it. I felt great when the Sox won, especially when they stuck it to the Yankmees to do it. That was payback in a big way. But the younger ones (and apparently Josie as well) are just so full of themselves and their team.

Oh Josie, Josie, Josie, one win in the last 7 is hardly something to hang your hat on. And tell me how did they do today, what is that word you called me? I believe you went out of your way to prove my point didn't you? Thanks for doing my work for me my dear.

You might wanna hoof it on down to Our Lady of Perpetual Motion and tell God (because asking is beneath a Red Sox fan) to fix Beckett's ankle. As I said, the Rays might not do it but the Sox could still lose to out to LA.

BTW if you think I am a Dolphin fan, then perhaps you should attend a few geography classes with Sugar Bear and check out the maps there. Me rooting for Miami is like you rooting for the Yankees. We're about the same distance from each of them.

Lucki, the stadium is in the wrong place. You guys put your stadiums between Dallas and Ft Worth to put them as close to as many people as possible, we put ours in downtown St Pete to put it as far from the Tampa population as possible. I've always thought the stadium was in the wrong place, they should have put it either just across the bay from Tampa near where I work or in Tampa next to the Bucs Stadium which is not far from the Tampa side of the bay. They'll either agree to build a new stadium in the next few years or the Rays will be gone because they cannot stay in downtown St Pete and draw enough fans. I hate to say it but it's true.

Wow, you ARE a biatch. Who knew?

If I disagree with you I'm a biatch? Or is it because I used a bit of logic and pointed out a small gap in your geographical knowledge? I guess we've come a long way from "I disagree with what you say but I'll defend to the death your right to say it." Boston used to be known as the Cradle of Liberty. Now it's apparently, I'm right and you're a biatch.