Bad news all around

Late last night the sad news came out that former Tampa Bay Buc and NFL Hall of Famer Lee Roy Selmon had been taken to the hospital after a massive stroke.  Some reports were even saying he had died while others only said he was in the hospital.  News of his death were apparently premature but outside of that the news has not been very good.  His brother was quoted as saying there was only a 20% chance of recovery.  Lee Roy is 56 years old. 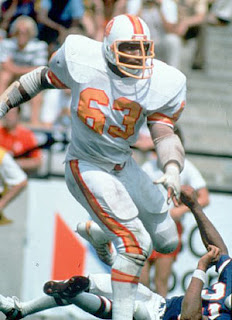 I never saw him play in person as he retired a few years before I moved here due to back trouble but I remember what a defensive force he was first at the Univ of Oklahome then as the only star for the expansion Bucs.  He took them from 0-26 to the NFC championship game in just a few years.  But more than his football prowess, Lee Roy was known for the man he was.  Though he grew up in the small town of Eufala, Oklahoma, he adopted the Tampa Bay area as his home and retired here.  He was instrumental in helping the Univ of South Florida start their football program as the assistant athletic director then becoming the AD of the school in 2001.  He took them from a fledling program to membership in the Big East conference where they are today.

As great as his accomplishments have been, you never heard it from him.  He was always a humble man, grateful for what he had achieved solely through hard work and dedication.  A quiet and thoughtful man who never gave offense but a fierce competitor on the field.  After retiring he worked in banking until USF called and he joined their athletic department.  He gave so much to the community they even changed the name of the Crosstown Expressway to the Lee Roy Selmon Expressway.   Stress led to his retirement from the AD position but he still maintained strong ties to the university as president of the USF Foundation Partnership for Athletics.  Everyone who knew him commented on how gentle and kind he was away from the football field.  Though reports now say he is responding to family he is still in critical condition.  Please keep him in your thoughts and prayers.

This week also brought news of a different sort, and again not the good kind.  You may have seen a story this past week about a referee who was attacked in Sarasota during a football game.  Not a good situation.  Of course being near to the action, I have followed the story very closely.  If you haven't seen the video yet, you can see it here.   The referee at a youth game last Saturday was attacked by some coaches of one of the teams playing.  When this all started, one of the players actually grabbed the ref and flattened him.  Reports since then have stated the ref was ok and that he had a broken shoulder.  He had a press conference yesterday and didn't appear to be injured.

I've worked with the ref before, he used to be in my association.  Jayme is a good guy and a pretty sharp ref though he has a low tolerance for bullshit and he doesn't put up with much talk from coaches.  According to all I can gather, Jayme threw one of the coaches out after he disputed a call.  The call was actually against the other team.  After he tossed the coach, the coach threw a water bottle at him and came toward him.  And Jayme unloaded on the guy.  And then the brawl started.  And it got ugly.

Right now 3 coaches and the player who tackled him are being charged.  About 5 years ago, Florida passed a law changing battery on a referee to a felony offense which means these guys are all in some serious trouble.  According to the Sheriff's office, though Jayme took the first swing, he was allowed to defend himself and that guy throwing the water bottle then coming toward him constituted a threat.

Anyway, it was bad. No one looks good in a situation like that.  And it got pretty dangerous.  I've never been in a situation that bad but I can see how it gets that way sometimes.  Just thankful I wasn't in that one.

Work was another tough slog this week.  A lot of people took time off, we still have people testing the new stuff so they aren't involved with the daily work.  Not that big an issue as the amount of new work has been doable with a shorter staff BUT the daily reports are unchanged and there are a limited number of people to handle them.  That is an issue.  Everyday a number of reports are assigned to us.  Since many of the people who handle these reports are in testing, there are a limited number of people who can do the reports.  We are basically shuffling these reports between us every week.  So instead of doing a certain report for 1 week out of every 5 or 6, I'm doing it every other week.  And the next week I'm doing other reports.  Which takes time away from doing everything else.  It gets a bit annoying, even more so when someone else is out and I have to cover another report on that day.  But enough of that crap.

This week with end of month, we had a number of things we had to knock out by the end of Wednesday.  Then on Thursday we had statement Q&A.  We produce a bunch of statements right after the month ends to ensure there are no systematic problems that will cause a big issues.  I had that duty this month which meant a few more hours of OT this week as well.  I can use the cash so you get no argument from me but it was a tiring week.  But now I have a long weekend to recover.  I do have a wedding to attend on Sunday for my nephew.  That should prove interesting.  Other than that I have no real plans as I have no football this weekend.  Next week should prove a different story.  Well enough about me.  Next weekend I might even get some poker in.  Till then, stay lucky you nuts.

They didn't just attack a ref, they ganged up on him - just terrible.

Yeah they did and that kid who tackled him didn't help either. After being hit a number of times by kids in pads, that tackle had to hurt.

neo- I don't remember getting your pick for the NFL Picks Contest. Please send them ASAP!