No poker for you

It's another Saturday night of poker for some in my household but my participation is limited solely to staking the PQ in a tourney.  While she is sitting in air conditioned comfort raising and bluffing the locals, I will be chasing the kids around a football field 5 miles down the road and most probably sweating my ass off.  The way I feel right now, I probably won't be running too fast.

Thursday night I had to do  JV ball game just down a few miles from the house.  The sky was ugly when I got to the game and I figured we'd be lucky to get the game started.  But we got going and actually got most of the way through the first quarter before some lightning strikes convinced us to suspend the game for a while.  Everyone trooped inside to wait it out.  There was a fair amount of thunder and lightning but it really didn't rain hard.  About 45 minutes later we went back outside as the rain and lightning had stopped at least for now.  We gave the teams some time to warm back up and started up again.  The home team was far superior to the visitors and the game became a blow out.  Lightning appeared in the distance to our west (the storms had come in from the east it seemed) so it looked like everything was blowing out into the Gulf.  As the game progressed though, the lightning to our west got stronger and the storm didn't go away, it just kind of sat there.  We came close to stopping the game a couple of times but the storm didn't get nearer either though the lightning was impressive a couple of times.  Fortunately the game was a blow out, we cut the halftime break short and had a running clock through much of the 2nd half so we got out of there pretty quickly.  It wasn't a hard game to ref and though I got run into pretty good on one play, I came out of the game feeling pretty good.

Friday was not so kind to me.  We had to go to Admiral Farragut to do their game with Keswick Christian.  Farragut is a good time, and they were expected to compete for the state title this year in their class.  No team from this county has won a state championship in football in 30 or 40 years so if they got there it would be a pretty big thing.  But last week, Farragut had suffered injuries to their QB and a couple of other big players and lost a game they were expected to win.  The QB is still out so we weren't sure what kind of game we would see.

When the game began I could tell Farragut was a good bit better than Keswick and they marched down and scored fairly quickly.  About midway through the 2nd quarter Farragut was up 14-0 and hadn't been threatened.  They were pretty undisciplined and took some stupid penalties though.  Farragut had to punt from their own 40 yard line and the center snaps it over the punter's head.  The punter goes back to pick up the ball on his own 15 and muffs it but then finally picks it up.  Keswick is all over him and he gets the bright idea to pitch the ball to a teammate.  The ball hits the ground and a mad scramble begins for the ball.  By the time it's finally recovered, the ball is on the 2 yard line.  Keswick punches it in from there and is only down 14-7 at the half.

I was ready for half time by then.  A guy had hit me in the side during one play when there was a fumble right in front of me.  I had also turned my knee a little as my foot got caught up in some soft ground when I turned to follow a play.  The third quarter starts and there's more undisciplined play.  Farragut goes to punt from their own 30 and the center snaps it over the punter's head again.  This time someone must have talked to the punter because this time he picks the ball up at about the 10 and heaves a pass out of bounds.  The play might have worked in the NFL.  Here in high school it didn't.  There is no rule in high school ball about throwing a ball away if you're outside the tackle box.  The rule in high school is, this is intentional grounding.  So instead of Keswick taking over at the 30 yard line due to an incomplete pass, we have intentional grounding from the 10 yard line.  Loss of down and half the distance to the goal, Keswick takes over at the 5 yard line.  They punch it in for the TD but the extra point is blocked and they are still down 14-13. 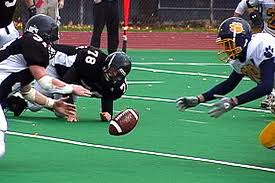 Keswick tries an onside kick and almost gets the ball but Farragut takes over on their 40.  A great catch on 3rd down gets them inside the 10.  The next play they run to the right and runner gets close to the goal line.  I'm trying to get close to the play to see if there is a fumble or the ball breaks the plane but guys are running into me and one guy gets blocked into me and gets me with his cleats in the shin.  That hurt.  The runner goes down just before the goal line and I'm hobbling up to the ball after that.  The next down Farragut punches it in.  At the end of 3 its 21 - 13 and we still have a ball game.   The 4th quarter is still more of the same undisciplined stuff from Farragut.  Midway through the 4th Farragut is driving on the Keswick 35 still up by eight.  After a short pass the receiver and a defender start jawing at each other.  Me and another ref go to break them up and as their starting to separate, the Farragut player pushes the other player in the face.  Up goes my flag, 15 yards for unsportsmanlike conduct.  Another stupid penalty.  Undisciplined.  Game finishes out as Keswick never threatens another score and Farragut doesn't snap any more balls over the punter's head to set them up.  Still it was a decent game to ref outside of the hits I took.  I know why the NFL moved the umpire to the offensive backfield.  Even in high school it's a jungle out there, you got the lions fighting the water buffalo and I'm just caught alone in between them.

Here's some picks for the college games today:

I like West Virginia +6 over LSU today.  LSU is very good but WVU is no slouch and after 2 big wins over good teams the last few weeks, LSU is due for a non conference let down.  Also Morgantown WV is a tough place to play.  If LSU goes out and whips them, I really want to see their game against Bama later on this year.

I'm also taking Alabama -11.5 over Arkansas.  Arkansas is young, Alabama returned 10 of 11 from their terrific defense last year.  Yes they lost some offensive players but it's not gonna matter.  Alabama takes this down by 3 tds.

I'll take Middle Tenn St +12.5 against Troy St.  Troy is pretty good but MTSU plays them tough.  I expect this game to be a lot closer than the spread.

One other one I'm looking at and may play is UCLA getting 4.5 at Oregon St.  Oregon St lost to Sacramento St and is favored against anyone?  Not to say UCLA is all that but at least they beat San Jose St and played tough with Houston who is pretty good this year.

So that's my story today.  I'm gonna spend the rest of the morning and early afternoon rehydrating and thinking about a dream I had last night - actually this morning.  When I got home last night, the PQ was nodding out in her recliner and I sent her off to bed.  I had picked up a bite to eat on the way home.  While I was eating I started watching the Orlando Edgewater football game from that night.  I guess it carried over when I went to bed.  Somehow I dreamed I was refereeing that Edgewater game.  At halftime we're leaving the field and I look in the stands  and see Casey Anthony in the stands.  I called out to her that I knew someone who was a big fan of hers.  She said, "well why don't you give me his number and I'll give him a call." but I told her he had recently had heart problems and talking to her (or more) would probably do him in.  Sorry Light. 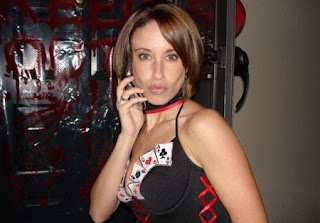 I hope everyone has a great weekend.  I hope I survive my 3 games tonight relatively unharmed.  I also hope I win the lottery tonight.  I think my chances are slightly better on the first than the second hope.  Have fun y'all and stay lucky.
Posted by The Neophyte at 12:18 PM

Hey I'm the one who will be in need of luck. Bad luck for her is she gets knocked out of the tourney, bad luck for me and I'm knocked out.

Being a ref is more dangerous that I realized!

Being an umpire is. We all get banged up during the year, sometimes pretty seriously. I'm thankful I've not received anything worse than cuts and bruises. During the football season I'm usually pretty sore on Sundays, sometimes on other days. College umpires have it worse I'm told and I wouldn't be surprised to see them adopt the NFL rule and put the umpire in the offensive backfield too. I don't know if we will do that in high school but I hope not. Then again, as I get older and less nimble maybe I will prefer to be in a safer position.

It's a freaking nightmare I tell ya ...