What to do today, what to do?  I got myself moving earlier than usual, already finished my iced coffee, showered and got dressed.  That puts me about 3 hours ahead of my usual Saturday morning.  The wife and daughter are off to the mall so I have all this free time right now.  I could:

Pop open a bottle of wine and relax the afternoon away 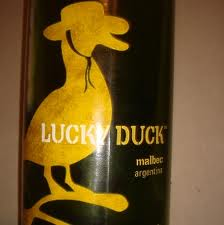 Or maybe go out to the pier and people watch while waiting for a nice storm to take some pictures of.  I love it when a storm brews over the bay like this 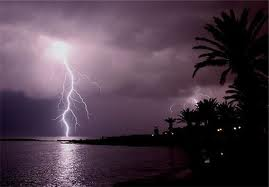 I am getting a little hungry.  I maybe could go out for a bite to eat as I am sure they'll be doing that somewhere around the mall 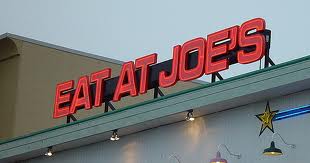 It used to say Joe C's before the last hurricane
I'm pretty sure tonight is gonna involve some cards at some point.  So I had best forgo the wine for now and save it for later.  That's cool.  Maybe I should do a little practice this afternoon or I could head over to the poker room early and play some NLHE to practice or even some Omaha Hi Lo as I haven't played that in a while.  Either way my day is wide open.
What else is going on?  I was reading one of the blogs online and the guy mentioned he wanted to re-read a book that had helped him a lot called "The Poker Tournament Formula" by Arnold Snyder.  It sounded like a good book and I'm always looking to increase my knowledge and strategies for poker, especially tourneys, so I found it at the library and checked it out.  Good idea.  It's the first book I've read that is specifically geared for lower limit tourneys like you find at the local poker rooms.  I've been spending the last month or 2 trying out some of the things the book suggested in the tourneys.  It has been up and down as I've taken more risk and had more problems to solve but I also have seen the results a couple of times too.  Last weekend it worked to perfection, I had a great table rep and didn't get unlucky more than once or twice.  And I had enough chips that I could afford to be unlucky when we got down to it.
My biggest problem in tourneys is I too often get shortstacked and get knocked out a bit before the final table or reach the final table really short.  One of the consequences of this is that I have learned how to play short stacked pretty well.  But really it would be a lot easier to reach the final table as one of the bigger stacks, be able to selectively push people around, and afford to take a bad beat and still be in position to cash.  So many times I've gone in as a shorty and lose with AK or a pocket pair to some crap hand.  But last week I got to the final table as an average stack.  Took advantage of some really loose play by a biggie and a good flop with JJ against another.  My tight image also worked in my favor and since I wasn't a shorty, the big stacks didn't want to screw around with an all in on my part.  Once I got big, I made sure I wasn't playing too loosely against the shorties but I took advantage of 2 or 3 guys with medium stacks that I knew I could push around some.  To say I got some use out of the concepts in that book would be an understatement.
I liked the book so much I started to outline it.  I'll probably buy it (I looked for an electronic version of the book but they didn't have it, gonna look again shortly.) at some point in the near future but since I don't have too much time left on it now, I better renew it and finish that outline.  I found when I do an outline, I grasp whatever I read a lot more clearly.  Setting things to paper just makes it a lot clearer for me.
I like watching those shows where guys are buying storage units to make money on reselling the items or finding something really collectible.  One guy made a very cogent remark today.  He was talking about an Atari 2600 video game.  Now this game is OLD, maybe the first home video game system.  He found it in the original box and figured a value of $250 for it, probably a good bit more than it cost when new.  He said people in their 40s and such have a lot of disposable income now and are willing to spend big money to buy their childhood back.   I can understand that as most of us think life was better when we were younger than it is today.  For myself, I think life was simpler when I was young but not necessarily better.  There have always been crises in the world, the economy in the dumps, inflation, etc.  The players change but the problems don't.
I'm not one of those guys who needs to rebuy and relive their childhood.  I like getting my entertainment a bit more up to date.  But I do admit I like to watch older movies, I like my oldies radio, and I'm definitely not one of those guys who needs to get the most up to date electronic gadgets (I do love my electronic corkscrew however) and gizmos whether its a computer, phone, or game system.  But I also realize that no matter how much we may not want it to, things change and you better be able to adapt or get left behind.
Well the PQ just called and asked me to run to the store and pick up a few things while she's at the mall.  So off I go.  I hope everyone else is having a relaxing and enjoyable Saturday.  Someone tell Lucky to make better baseball picks, I do like his Rays pick for today, and how about a gal in Rays gear on your site?  If anyone else plays cards today, get lucky and stay lucky.  That's all for now.﻿
Posted by The Neophyte at 3:45 PM

Looks like Lucki Duck is smoking with the wine and with the hot baseball babes on his blog.

Hitting my new favorite b & m poker room tomorrow to see if I can continue to profit at its $1/2 cash games.

Good luck to you tomorrow Lightning, I was not so lucky tonight. I broke about even on the cash tables at least.

Arnold's book is great. He has a second one, it's probably not worth it as he said his piece in the first one.

Read them both Mojo and the second one is just as handy but in a different way. It's geared more toward slower tourneys but it also has some great info and a couple of tips I used very successfully last weekend.