Vegas - The Good, The Bad, and The Ugly

Got back from Vegas late last Friday night/early Saturday morning.  It was a fun trip and I'll detail more in the next few days about everything but thought I'd talk about some of the things we saw this trip.

Good things - Wow did we eat well.  Of course travelling with our daughter the foodie ensured we would hit some restaurants we had never been to before.  Here are some places you might want to try next time you go to Vegas:
Cinnamons Restaurant - This is a small chain from Hawaii, the Vegas location is the only one on the mainland, and they serve authentic Hawaiian dishes.  I had been wanting to try Loco Moco and this was my first chance.  It was great.  Try their pancakes too.  They are known for their guava chiffon pancakes but the PQ opted for the Red Velvet pancakes.  We expected them to be pretty dense but they were very light and fluffy not to mention delicious.  Our daughter got the Korean BBQ which I feared would be spicy but was actually a bit sweet and very tender.  The restaurant is located west of downtown near Summerlin right off US95. 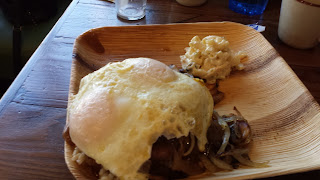 
Eats - Just outside of downtown in an area that used to be run down but is now in a renewal, Eats is a nice locals breakfast/lunch/brunch place.  A bit hipster and it gets loud in there but the food is worth the wait.  We hit this place just before noon on the morning we arrived in Vegas.  I had a very tasty chicken fried steak and eggs and of course sourdough toast which I usually can't get here in Florida, our daughter had a fantastic killer grilled cheese and tomato soup and the PQ had a delicious chicken sandwich on ciabatta with home made chips.
The Peppermill - right on the strip just north of the Wynn/Encore across from where the Resorts World is being built.  This is one of the first places we eat in Vegas.  If you've never been here, you must go.  Step back into the 70s.  Purple neon and velour covered furniture.  Food is great and portions are huge.  Usually I get an egg dish but I chucked the diet for the week and it had been so long since I'd had French toast that I got this huge order of French toast with fruit (hey that's good for me right? ) and whipped cream.  I ate half then traded with the PQ and had some of her chicken fried steak and eggs.  None of us finished our food and we all left stuffed.  There's also a lounge in the back with a fire pit which does great business every night.  In the Vegas tradition I had Baileys and coffee with my breakfast. 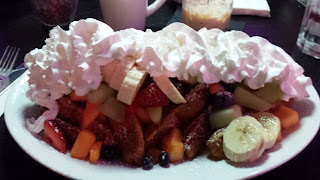 Somewhere under this is 6 halves of French toast.

Wynn Buffet - I thought it was excellent, our daughter was unimpressed saying the food lacked seasoning.  Didn't stop her from piling on the desserts.  Great biscuits but a surprising lack of sausage gravy to go with them.  Strange, not refined enough for the Wynn?


El Burro Burracho - TV Chef Guy Fieri's Mexican restaurant in the Rio.  There's also one in the Linq I believe.  Wow this was good.  I've been wanting to try Beef Machaca Enchiladas and they were fantastic.  The girls split an order of trash can nachos which were also excellent.  We'll be eating here again next time.
Gordon Ramsey's Fish and Chips - didn't have any fish but the chips are out of this world.  While not a fan of his, the man knows how to make delicious fries.
Pink Taco - more excellent Mexican food this time at the Hard Rock casino at the Pink Taco.  I wasn't really hungry so I had the quesadilla appetizer and me and the PQ split some queso fundido.  Our daughter was after the pink tacos and really enjoyed them. We'll also be back as the Hard Rock treated us very well in the casino.
Barley Bros Brewery - by Lake Havasu.  Right next to the London Bridge that was moved stone by stone from London to Havasu City.  PQ had one of the best steak sandwiches I've had - thick but very tender and the bun was perfect.  My burger was really nice and the cole slaw with it was really good.  The foodie had a pizza which was also well made and tasty.

Other good things.  Trader Joes in Vegas sells hard alcohol including their own brands of Rum, Vodka, Scotch, and Gin.  Finally went to the Gamblers General Store outside downtown.  Very cool, got a number of souvenirs there.  Gambling at the Hard Rock and Palms was fun and profitable.

Bad Things - It was very sobering to go to the Welcome to Las Vegas sign at the south end of the strip and see the memorial to those killed only a week before.  It was good too to see the offerings from people who many times did not know the victims and the city really has come together over the tragedy.  The concert venue was still taped off and police were not letting people in except for a few at a time to retrieve belongings.  The window where the shots were fired from was easy to see as it was the only one with plywood on it.  Ugh.   My gambling the first 3 days qualifies as bad.  I couldn't win anything on any game whether machine or table.  I was calculating how much I could continue to lose and still have money but thankfully everything turned around the last few days.  Paying for parking on the strip is definitely bad.  What the hell, I'm coming to your casino to play and dine and put money in your coffers and you have to nickel and dime me to park there too??  And it's not a buck or 2, it's serious coin if you stay awhile.  When did the Strip Casinos become Disney World?  Almost makes a person not want to play on the strip.  This is not an issue off the strip, no charge at the Rio even to valet, nor at the Palms right down the street.  Fortunately as a Caesars Platinum rewards member I get free parking and valet at their properties on the strip and I did make use of that.  But even self parking at the Wynn or Bellagio costs if you stay more than an hour.  I can see myself not going to those places very much in the future.  One other place I parked for free was the Tropicana which I had never visited before.  While I was gaming there, the PQ and Foodie were visiting M&M world, Hershey World and World of Coke at neighboring casinos. Odds weren't nice at the Tropicana but the people were extremely nice and the layout was cool inside there.  I was surprised to find I was a rewards member there due to signing up for a rewards card at Boom Town in Biloxi several years before.  Another bad thing was I didn't play much poker.  I had plans to play on 2 different nights including the last night we were there but ended up backing out.

Ugly Things -  I did play one small poker tourney at Harrahs.  Like the poker room much more than the old room as it's not set off completely from the rest of the casino.  I lost to maybe the worst player I had ever played with.  Of course, I wasn't the only one - he took out at least 4 others.  It was crazy.  The drivers around the strip are absolutely nuts.  I saw some outrageously bad driving including a taxi who decided the left turn light was green when it was red on Las Vegas Blvd and almost caused a huge pile up at Harmon.  Some guy apparently climbed over one of the sidewalk barriers on LV Blvd and was run over.  As Ron White says "you can't fix stupid".  There's a reason those barriers are there and walkways were built over the street.  I picked up a nasty cold about half way through the trip.  While I wasn't suffering much during the week, I was tired a lot and it really kicked in when I got home.

If you ate well, the rest doesn't matter.

Hey Ace
If you're talking the Nevada/Arizona border, that's Lake Mead. Lake Havasu is about 2 hours south of the Hoover Dam along the California/Arizona border. Only way to get to Cali is by boat from there. By car you have to go north or south of the lake to cross the Colorado River. Which we did after leaving Havasu City. Never been down there before and it was a fun trip.

Oh Mojo, we ate very well. We take Napoleon to heart when he said "An army (aka my family) travels on its stomach"

Been to Havasu before. My brother was the sheriff in that county for 17 years before retiring a few years ago.

I haven't been to the Wynn buffet for many years. Caesars and the Wicked Spoon are also near the top of the list, and Bellagio isn't bad either.

Thanks for the restaurant report. I try to check out some new places each trip to Las Vegas.