Some days the burro gets you

Sorry about the delay in posting.  After getting back to work I've been buried and when not buried I've had some obligations (including a golf tourney I played in last weekend) which has kept me away from the keyboard.

I wanted to write up this post a lot earlier and didn't,  Now I hope my memory doesn't betray me.  I mentioned losing in a poker tourney to maybe the worst player I've played with.  Nothing I've done since then has changed my view.

We were at Harrah's and while the girls were playing some slots and walking around, I checked in the poker room to see if they had a tourney going on.  They said they had one starting soon so I signed up even though there was only a couple of tables going right then.  As it turned out, it was basically a single table tourney as it started with 9 of us but you could rebuy for the first hour or so and a couple more people did buy in after we started but they replaced guys knocked out.

There was one guy a couple places to my right who was maybe the worst player I had seen.  Somehow he could not grasp the concept of raises.  If he bet 200 and someone raised to 800,  he'd put out 800 more.  I saw him do this at least 8 or 10 times.  I figured he would be one of the first to be gone, especially when I saw him call down a couple of people with only 3rd or 4th pair and lose to a guy with AK who flopped an ace.  He called one guys river bet of 5K with 9-5 after pairing the 5 on the flop.  He would call nearly any raise and after the first half hour his 20K stack was down to maybe 6K.  Then lightning struck and the poker gods decided to fuck with every other guy at the table.

I had beaten him on one hand early when I flopped 2 pair and he called me on the flop and turn (amazingly folded the river) for a couple of thousand.  But apparently some people at the table were not very observant.  First a couple of guys decided to bluff at him when they missed their AK and KQ hands on the flop, etc.  And he just kept calling them with small to mid pairs and taking their chips.  Before you know it he's back to 20K and these other guys are grumbling.  Then he gets into this hand with the 2 guys to my left.  Neither guy had played overly aggressive.  I was in the big blind when the first to act to my left just calls.  Next guy puts out a healthy raise so I figured him for a solid hand.  Mr Lucky to my right calls of course and I fold my crap hand. I was surprised to see the guy next to me then call and I figured him for a big hand too.  Flop is A, 2, 6 with the Ace and 2 of clubs.  Guy to my left leads out a healthy bet, guy next to him pushes all in.  I'm figuring one of them flopped a set or something.  Mr Lucky calls the all in.  That surprised me but not too much.  Then the original bettor also goes all in.  Mr Lucky has them both covered by a little bit now.  Guy to my left shows AK off suit for top pair, top kicker.  The first all in guy has KQ of clubs for a nut flush draw, and surprisingly, Mr Lucky shows A2 for flopped two pair.  I half expected him to show up with a 10,6 or something but in this case he actually had the lead.  Of course calling a healthy bet preflop with A2 is not what I'd do but it works for him.  Turn is then the 10 of clubs completing the flush for the KQ,  Then the river is the last ace and Mr Lucky takes down a huge pot with aces over twos and takes both guys out.  He goes from lowest in chips to table leader in a very short time. Which can happen but damn.

I of course am getting an endless succession of 8-3, J-4 etc.  The few playable hands like 9-10 suited are completely missing.  Mr Lucky on the other hand takes out a couple of more people with some unlikely hands - I think he won one with 10-6 when he filled a straight and beat a guy who flopped two pair with 9-8.  I'm bleeding chips from blinds and antes and I'm first to act with about 4K left when I see A-4 suited.  I push all in.  Mr Lucky calls with 9-2 and the whole table is shocked my A-4 miraculously holds up when I flop a 4 and he doesn't improve.  Next hand I'm in the big blind with 3-3.  No one raises and I just call.  4 of us see a flop of JJ2.  I push all in for almost 8K.  Everyone folds except Mr Lucky.  He calls with K5.  I dodge the turn but lose to a 5 on the river and my tourney is done.  I'm not shocked at the outcome as everyone else has lost to that guy.  I almost wanted to rebuy just so I could see how the rest of the tourney played out but I was disgusted at the way my poker had gone, I hadn't played particularly well and had zilch luck.  Of course that was how the whole week had gone to that point so I decided to call it a day and went looking for the girls so we could grab a late lunch/early dinner.

I never did play any more poker in Vegas.  A couple of times later including the last night we were there I planned to play and I was just too beat.  I was also coming down with a nasty cold that kept me out of work 2 days when I returned home so maybe that played a hand in it.  Oh well.  It was probably for the best.

After 3 days in Vegas I had not won diddly squat and I'm wondering if I'll need to budget my gambling expenses the rest of the week to make sure I have enough money.  Then on Monday we decided to day trip down to Hoover Dam and further down to Lake Havasu.  While the PQ and I have visited Hoover Dam in the past, this was a first for our daughter.  I was pretty shocked at how much lower Lake Mead is than the last time we were there.  Then again it was fall and after a long hot summer so I'm sure it's a bit higher in the spring.  Lake Havasu and Havasu City are nice but unless you're into boating and retired, it's not where I'd live.  I mean it's out in the middle of absolutely no where.  Then again being 2 or 3 hours from Vegas does have some appeal.  We did see the London Bridge that was bought and shipped and rebuilt there stone by stone.  Had a really nice lunch at a brew pub next to the bridge and took a few pics by the bridge. 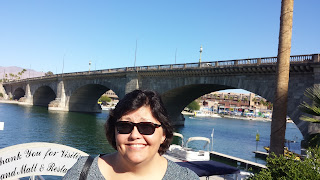 The PQ by London Bridge

On the return to Vegas we took another way back so we could go into California.  I'd never been to California before so I can cross that off my list.  That area of California doesn't look any different from Arizona, - dry and sunbaked.  We did get to visit the thriving metropolis of Needles, home to Snoopy's brother Spike.  So I can cross that off my bucket list.  Then we headed overland on some realllllly sketchy roads up to Laughlin Arizona.  I missed the exit I wanted to take on State Highway 95 from Needles (Needles Highway I believe and calling it a highway is a major stretch) and ended up on this two lane beat up road called Needles Highway that I put me in fear of my life led through some very picturesque countryside that man hadn't travelled through since they rode on burros.  In fact we even saw a burro crossing sign on this road.  Like burros can read signs (they can't but they can follow the pictures).  Calling that road a highway was proof of the optimism of the residents of Needles.  I was scanning the horizon looking for bands of Indians massing to massacre the wagon train but never did see them.  However the road did in it's own way lead to Laughlin, even though I had my doubts along the way.

Laughlin was a pretty town along the Colorado River with some casinos.  We didn't spend very long there, we did hit the Harrahs in town and I actually won a little cash on the video poker but lost it playing craps continuing my bad run there.  Next time in Vegas maybe we'll come back here and hit a few of the other places.  It was a pretty long day's driving and I was ready to get some rest so as darkness fell we drove back to Las Vegas.  Saw a pretty sunset on the way - they get some great sunsets around the mountains there.  And I didn't lose money the whole day which was some improvement over the previous 3 days.  Some days you win by not losing.  Luckily it all changed the next day.
Posted by The Neophyte at 9:15 PM

Sorry to hear the poker didn't go any better.

I've had some obligations (including a golf tourney

Poker can be a cruel game, but it sounds like you had a fun trip despite the poker.