Too much time on my hands

Old farts I mean gentlemen of a certain age like myself might recognize the title of the Styx hit above.  I am using that as a kind of tongue in cheek title because too much time is something I definitely don't have right now.

Work has been super busy of late, we have a number of new reports coming out that require testing and refining so that these reports are correct when one of our financial advisors presents it to his client.  What this has meant for me and a few of my coworkers is putting in extra time trying to do all the testing, log bugs we find, etc.  Most days I'm putting in 10 hours or so and I've even been putting time in on the weekends as well.  The overtime is nice come pay day but it's really screwing with my leisure time

So there was no poker for me this weekend.  We actually had a couple of new reports being downloaded this weekend and we had to test them on Saturday night to ensure they were running correctly.  The new reports ran great but whatever the programmers downloaded completely screwed up one of our old reports which I caught during some tests I was running.  That was too bad.  The PQ was over at Derby Lane trying to re-enact her previous run in the 6 pm tourney and was unable to join her.  I did tell her if testing ended fairly quickly - it was only supposed to go for a couple of hours - I would join her.

We started testing a little before 8 pm.  By 9:30 we were almost done and everything was running smooth as silk.  Then I found the issue with the older report.  Boom, everything goes to hell.  The programmers were trying to figure out what went wrong and then how to fix it.  I actually went into the office to test because it's easier for me to do it there rather than at home and it's closer to Derby Lane than my house anyway.  For a while it looked like I'd be out before 10.  Then it got extended while they worked on it.  Then extended a bit more.  About 11:15pm they send me home but I have to sign in from there and see if they are ready for us to continue testing around midnight.  They weren't.  In the meantime the PQ busts out of the tourney and heads home so I didn't even get to play any cards that night.  Finally about 1am they tell us to close up, it's gonna be hours later before the fix can be input and tested and they'll get a few people to test it on Sunday morning.  Not me thankfully as I had 2 fantasy football drafts on Sunday.  And after 6 hours of doing this stuff on Saturday night, I was about done.  I heard today that they stayed till 3 am working to fix the issue and finally did get it working right.  As I said, the OT will be nice on my paycheck but man am I tired today.

While I did not get to sling cards yesterday, I did manage to hit the golf course Saturday morning.  It was a tale of 2 nines.  On the front nine, I was killing the driver - I even hit one about 260 yards which is much further than my normal drive goes.  But outside of my putter, it's like I was using wooden clubs to hit the ball after the drive.  My irons were horrendous, my pitches were bad.  It's so disheartening to get a ball 3/4 of the way to the green in 1 shot and then take another 5 to get it the last 80 yards.  I did it on the second, third, and fourth holes.  5 and 6 were complete disasters from tee to green.  7 was good.  Short par 3, I hit a nice iron to about 15 feet and just missed the birdie.  At least I got a par.  On 8 I got unlucky when my iron came in left of the green, hit the cart path and went way left.  Then on 9  - a long par 5 with a dogleg right - I hammered another drive, hit a really good 4 iron to about 75 yards.  Hit a wedge a little too good all the way to the back of the green.  Then 3 putt and take a bogie. For a glorious 50 on the front.

The back nine I didn't drive nearly as well on most of the holes, but I was hitting the irons and wedges much better.  Got 3 pars in a row, think I only had one double bogey and managed to shoot a 42 on the back.  So a 92 total.  Not terrible but I'd really like to be more consistent there.  Much like poker, golf can make you laugh and cry - or at least curse long and loud.  Managed to get all 18 in without a rain storm which I didn't think we'd be able to do.  That hurricane may be in Texas but it's stirring weather up all around the gulf and we've gotten a fair amount of rain the last few days.  And just for Lightning, here's a little golf porn just like Vegas Rob would add to his blog. 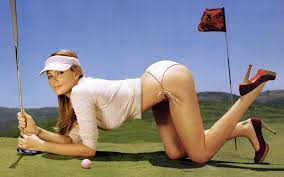 Today was 2 different fantasy football drafts.  I think I did pretty well but you never know until the season starts.  I'll hope for the best (and after the way last year went, expect the worst) and we'll see what happens.  By the way folks, pray for the good people living on the Texas Gulf coast.  While this hurricane was not the destructive force of Hurricanes Katrina or Camille, the way it's just sitting there dumping rain on entire area is really making a mess of that area.  Houston can flood from normally heavy rain, this kind of historic rain is putting a lot of the city under a lot of water.  I had some good times in Houston though I never lived there and met a lot of fine people.

Poker isn't frustrating enough without adding golf on your plate? Thank goodness I have always stayed away from it.

I had a very similar round recently. Shot a 40 (par 35) on the front and then fell apart on the back 49 (par 36). It was like two different people played each nine.

What can I say Lightning, I'm a glutton for punishment

Ace, it is often that way for me too. One good nine, one lousy one. Hell it can change from hole to hole and back again.