One of the things my wife would say to our sons before they went out with their friends at night - back when they still lived with us - was "make good choices".  Just about everytime they went out she would tell them this.  Seems to have worked as they are doing pretty well for themselves and I'm still not a grandparent.  Which brings us back to poker because really isn't that what it's all about?  Taking the available info and making the best choice?

Last Saturday the PQ and I headed over to Derby Lane for the 6pm tourney.  It's a relatively quick tourney with a $50 buy in and $5 add on for 2000 more chips.  It's fun and we like it plus if you bust out fairly early you can play the 8pm tourney.

Early on it looked like one or both of us might be hitting the 8pm tourney.  The PQ was down early while I started off well but then got whacked when a shorty pushed with 6-6 against my AK suited that I raised preflop.  I didn't put him on a big hand and called.  A 6 on the flop ended my chances on that hand and cost me 1/3rd of my chips.  After that it became a struggle to make anything happen.  One hand I was in late position.  One guy limps in early position with a medium stack.  I decide to steal with 22.  The big blind makes a healthy reraise and the original limper pushes all in over the top.  Ok, I give up.  I put the all in guy on aces or kings but the big blind did not and called for almost all his chips with AK.  Limper flips over AA.  Neither improves but a 2 on the flop meant I could have played like an idiot and won a monster pot.  Figures.

It took forever but I finally won a few pots to get myself up to an average stack.  The tourney only started with 42 players or so and only payed 4 spots.  I really wanted to chip up so I could get to the final table with a big stack but it wasn't happening.  One gal at the PQ's table was hitting hands right and left.  She had over 40K in chips (started with 6K) at the first break.  She managed to give a bunch back though.  We got down to 2 tables and the blinds and antes started really going up.  I wasn't gonna wait to get blinded out but kept running into big hands when I'd raise.  Or completely whiff with AQ.  Got all in with a shorty who had J10 and of course he hits 10-10 on the flop.  That hurt.  I really got a bit irritated when the button who was sitting on a decent stack made a big raise preflop.  I had AQ and pushed all in which he called with A10.  Flop was nice A44.  But of course the turn was a K and we split the pot.  At least it wasn't a 10 to take me out but still, I should have had a nice double up.

I kept tangling with this same guy.  Next orbit I get AQ again.  The guy pushes all in before it gets to me and I call.  He turns over JJ but this time I actually win the race when I flop two pair and he doesn't get his 2 outer or fill the straight.  That was a good time to double.  Very next hand I get 44 and he pushes all in again.  He has me covered still but I figure maybe I'm running good here so I call him again.  I turn a 4 and double up again.  Now I'm feeling ok.  Not a big stack but not small either.  Soon after this we get down to 10 and combine to the final table.

I was placed 2 seats left of the PQ which was a good place to be.  She was a shorter stack though the guy I tangled with was the shortest and first one out.  The big stack lady from before had given up half her chips or more, most of them it seemed were in the stack of the guy on my immediate left.  Lets say I gave him some leeway but he played pretty tight and we never really tangled.  Any time he raised I got out of it.  He wasn't giving chips away needlessly like the lady did but he wasn't pushing his stack around enough either.  The PQ told me the lady kept calling shorties who went all in and losing with marginal hands.  I saw her play a couple of hands that made me raise my eyebrows but never  had any cards to tangle with her.  People start dropping and the lady went out 7th when she ran 77 into AA all in preflop.  Buh bye.

With 6 left and 4 being paid I was about 4th in chips but well behind 1-3.  I really looked for a spot to double up.  I let the PQ push me out of one hand when I flopped mid pair.  Good thing as she flopped top pair.  She was in 6th when we gto down to 6.  The other shorty who had about my size stack lost some so I probably could have played really tight for a min cash but I wanted to win this thing.  A little later I'm in the big blind with J2 suited.  Pretty crappy but that's the way I'm running here.  One of the big stacks calls preflop which to me meant a mid Ace or something like it.  The flop is J-10-9.  Not great but still I have top pair.  I check and he bets 3500.  I put him on a draw or maybe a 9 or 10 at that point.  So I pushed over the top for another 13K.  When he starts thinking I feel pretty good.  There's 24K in the pot and he has to put in 13 for a bit less than 2-1 odds for him.  I didn't think I was giving him odds there but I don't mind a call because I really want to double up and have a chance to win this.  If he folds I still pick up a quick 8K which is a nice pot there and easily puts me in 4th.  Then I can afford to make a few plays.

He does call and doesn't like my J as he has K-10 for middle pair and an inside straight draw.  The next card is a damned K and I'm drawing to the last 2 jacks.  Which I don't get and go out 6th.  I thought about the hand and I could have played it different by pushing all in after the flop.  Maybe he dumps his hand then but I only pick up a little and I'm really looking to double up.  With blinds at 800-1600 and holding only 10 big blinds, I cannot afford to wait around long.

I was really afraid that the PQ would go out next and we would be 5-6 and both miss cashing but she managed to punish those guys for taking me out.  The other shorty got knocked out 5th and then she went on a tear and ended up knocking out the big stack to my left in 4th.  She went from 5th to first or 2nd in chips and ended up doing a 3 way chop at the end for a nice cash.  So she made even better choices than I did and since I paid her way in, I got a bit back as well.

Since it's Saturday again, she wants to go back and play the same tourney.  I figure on leaving here in a few minutes to see if I can't get into an Omaha game before the tourney while she and her sister and our daughter are at the mall.  Oh good, if anyone comes back with anything, you can guarantee the daughter will have it.

I've got the tv on in the background and the current program is called Wild Wives of Africa.  There's Lauren, Victoria, Cathy, Mariella and of course Josie.  Here is a pic of Josie. 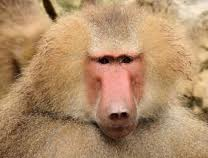 Yes I am watching Nat Geo, not the Playboy channel.  Lauren is a lioness, Victoria is a cheetah, Cathy is a hippo, Mariella a giraffe and Josie is a baboon.  She's kinda slutty too as she likes to mate A LOT.  Lauren is pretty picky about mating but then she goes at it every half hour for an entire day and night.  Damn.  Victoria is almost a nun and only does it at night.  Probably Catholic.   And here you thought this was about swingers in Cairo or Johannesburg.  Well I'm off to chase some cards.  Hope everyone had a good 4th of July and stay cool folks.  Whoda thought that Tampa Bay would be one of the cooler areas in the country with our highs of 91-92 everyday.  And here in Pinellas County there is almost always a decent sea breeze.  Of course we get about 6 months straight of this weather.  But it could be worse.  Stay lucky you nuts, luckier than me.
Posted by The Neophyte at 2:03 PM

Best post EVAH !!! It appears that you have seen grrouchie's Eiffel Tower cartoon ...

Good job on the tournament you recapped. Stuff happens. Congrats to the wife for the chop.