I'm sure some of you have noticed that I am a bit of a champion of gun rights.  While not a gun toting member of the NRA or anything, I do believe that it behooves us all to take responsibility for defending our own lives.  That self reliance is a good thing and that depending on the government to take care of you is not.  I know this is a minority opinion in many parts of the country but prior to the 1960s this was actually the way a lot of people thought.  So Sunday I did something besides just talk about it.

There was a gun show in Tampa that me and my buddy Chad decided to attend.  I wasn't going to necessarily buy a gun there because I had been pricing a few different guns online and in fact had almost bought one but held off when Chad told me about the show.  The last one I attended didn't seem to have prices that were all that great so I made a list of weapons I was looking at online to see what prices I could find for them at the show.  I wasn't expecting better deals but I was hopeful.

Losing an hours sleep on Sunday morning did not help but at least we weren't out playing cards till 5am on Saturday night.  And the new mattress was pretty restful to sleep on.  The mattress is a good bit higher than my last one, high enough that the dog can't jump on it.  She still managed to wake me up a bit after 8am by trying to jump up on the bed anyway.  Once I got her out I made some breakfast for everyone and a little while later swung over the Chad's place to pick him up. 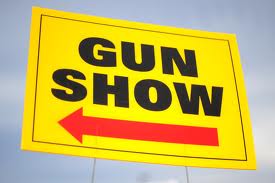 Good crowd at the show on a nice Sunday morning.  It was being held at one of the exhibition halls at the state fairgrounds.  We paid our entry fees and entered weaponry fantasyland.  Guns, knives, swords, ammunition, reloading supplies, even crossbows and military relics.  We just started wandering up and down the aisles.  The layout was pretty good, a lot more space in each row between the tables.  Some of the other shows I've been to have been pretty tight in the rows.  It was nice not to be completely packed in most of the time even though there was a good amount of  gun toting lunatics weapons afficianados there.  Early on I saw one of the guns I was looking for was on sale.  I checked it out but kept on looking at a number of other weapons as well.  I found a couple of others I was looking for at decent prices but not spectacular.  I also looked at some ammo that was for sale.  One table was selling .50 caliber shells that you use in the big sniper rifles.  Those shells are HUGE.  A big pistol round like for a .45 caliber is maybe an inch and a half long.  A .44 magnum round is maybe 2 inches long.  This .50 caliber round had to be 6 or 7 inches long.  Just immense.  No wonder those Marine snipers can take guys out at a half mile or more. 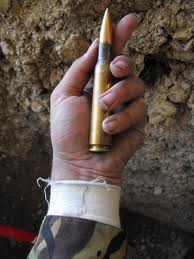 This guy could go right through you - and 3 people behind you
I walked around for a good while checking out different guns, knives, swords (including one massive two handed sword) pikes, bows and ammo.  Eventually I came back to the gun I was first looking at, the Smith and Wesson Sigma.  I had a choice of 9 millimeter and .40 caliber.  Its true that 9 millimeter ammo is a good bit cheaper to buy but the .40 caliber has more stopping power.  While target shooting is fun and all, it can be a bit pricey if you fire a lot of rounds.  But if I have to shoot for my own defense, I want to feel comfortable that a couple of hits will be enough to keep someone down.  Hopefully I never have to find out. 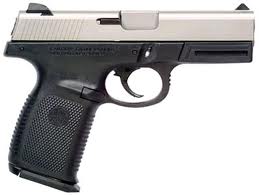 I never grew up around guns and in fact they always kinda scared me.  Anything that can punch holes completely through people is something to be treated with at least a modicum of respect.  The PQ has never been a gun fan either.  But even though I do not live in a high crime area, you never know when you may need to defend yourself.  I'm not one to go out looking for trouble but sometimes trouble comes calling no matter who or where you are.  If that happens, I hope I am a bit better prepared for it.  Of course owning a gun is no cure all for other issues, not paying attention to your surroundings, putting yourself in areas you shouldn't be, or even looking for trouble.  It is so much more important to keep awareness of who and what is around you and being prepared for the unexpected.  You don't open your door to a knock in the middle of the night without having some idea of who is behind it.

On Thursday I went and picked up my weapon at the Shoot Straight in Tampa.  Friday night was try it out day.  After work I went home and picked up the gun and met up with Chad and his wife at the range.  I'm not allowed to bring it with me to work, not even to leave it in my car, so it was waiting for me at home.  We had to wait a while to get a lane, surprising on the first Friday night of the NCAA tourney as I figured the gun range might be pretty slow, but eventually we got on the range.  I shot off all of my 100 rounds over the course of the next hour.  The targets we were using made it hard to see the hits until you brought them back closer to you so it was hard for me to shoot and adjust to my shots but under 20 feet I had no problem putting shots where I aimed.  Over 20 and while I was still hitting in the black rings, I was off from my aim points.  Unfortunately as I said, the black rings were hard to see when you hit them so I was all over the place it seemed when I got the target out to 25 feet.  But I hit almost every shot so I was relatively satisfied.  Next time I use different targets. 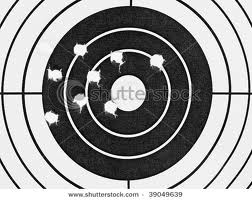 My target wasn't quite this good, but had more holes﻿
My one issue with the gun so far is loading it.  Those clips are tight and the springs they use are strong.  It was some work getting all of the bullets to feed into the clips, especially as they got fuller.  I never put all 14 rounds in a clip, I kept loading 12 in one and 13 in the other so that I was shooting 25 shots each time I shot at the target.  This way I always had an even amount of rounds left to load and always knew how much I had loaded.  But boy it was hard on the thumbs each time I loaded those clips.  I got better at it as it went along and it seemed like the springs in the clips were a little easier to deal with, or maybe I improved at loading the gun.  All I know is if I don't have a loaded clip in the house and someone breaks in, they will be able to kill me at their leisure before I'm ready to defend myself.  Think I'll keep it loaded when I go to bed each night.

So now its Saturday afternoon.  I was planning on working some today but woke up with a screaming headache.  I took 2 naproxen (Aleve) and it has helped a lot but still theres a bit of throbbing in my skull.  So perhaps I will pass on the work today, go in tomorrow, and try to nap a bit here.  The PQ is determined to play some poker tonight so I definitely need a nap at some point, especially if this is gonna be another 5 am trip.  So on that note I say good bye for now.  Have a great weekend all and I hope if you're cheering on a college in the NCAA tourney, that they do well.  Unless they are playing UF or USF.  It's been a hell of a tourney so far hasn't it?
Posted by The Neophyte at 1:42 PM

For being a guy to the right of center, I have been a pretty strong anti-gun advocate all my life. I am not so concerned about things like rifles used for hunting, but handguns have always concerned me.

Just a few days ago a guy was at my workplace and was causing some trouble. Police were called and he wouldn't back down. He reeked of pot. The police caught him with a decent amount of pot and a wad of money (looks like he was working that day!). They checked his car and found a loaded handgun.

So ... this guy who was high and pissed at my workplace had a loaded gun in his car. Not the kind of thing I like to think about.

If I lived in a different area where I felt some concerns I guess I would have to consider owning one. Right now my biggest fear is that the homeowners association will not like the condition of my lawn.

Yes, I also am worried about the condition of the garden areas in front of my house as well.

I'm sure your workplace is a gun free zone as well as mine isn't it?

I thought pot was supposed to make you mellow, not combative. Of course maybe the job was just a way for him to legally show income so he could work his other "job" without alerting the IRS

I work in a public building with several public parking lots nearby. The parking lot, although patrolled by police, are a prime spot for drug transactions. Drug sales usually mean that handguns are not far away.