I wonder if the Feds are looking for him?

Or maybe the mob??

Last night I attended the graduation of my niece from high school.  The same one my boys and daughter graduated from.  Every year they did the graduation in the morning on the high school football field.  Which is a pretty good idea if you're doing an outdoor graduation in Florida since it rains quite often in the late afternoon and early evening at this time of year.  It's also rather warm too.  Well this year was different.

They decided to hold the graduation at a local baseball stadium instead.  More room so there was no limit on how many could attend and they would have fireworks after the graduation was over.  They also were holding it at 7:30 pm.  Ummm  you guys are aware of where we are and what the weather can be like this time of year aren't you?  Before we left for the graduation we heard some thunder and I checked the local weather.  There was a small thunderstorm cell to our east that was moving north west toward the stadium.  Judging by the movement I figured it would either hit us at the field or skirt a little to the east of us.

When we got to the field a little before 7 it was a bit warm, like 86 and though there was a breeze you couldn't feel it sitting in the stands where we were.  We had good seats and were pretty shaded.  Graduation went off quite well all in all and did not take as long as I figured it would.  They started right on time and finished in 90 minutes.  One of the speakers was the alumni association representative who was a rookie in the NFL last year and had a pretty good year.  His name is Dexter McCluster and his cousin was in this graduation class.  He was a damned good player in high school as an undersized running back who set county records for yards and touchdowns but he was a long shot to play significantly in college at least on offense I thought, never mind the NFL.  But he proved desire and willpower not to mention working harder than the next guy can get you far and he had a fine career at Ole Miss culminating in being named the Cotton Bowl MVP and then was drafted in the 2nd round by KC.  He gave a good speech off the cuff as he says he never writes out speeches, he wants to speak from the heart.  Pretty confident for a 22 year old I thought.

The clouds rolled in about half way through the graduation ceremony but passed just to the east of us.  I saw a little lightning but nothing too bad.  It was a good graduation all in all.  Just a few days ago my niece also found out she was accepted at Univ of West Florida.  She wanted to attend Central Florida with my daughter but was not accepted there.  She also wanted to get away from home.  She'll get the chance to do that as UWF is in Pensacola, about a 7 or 8 hour drive from here.  Good for her.  I also wanted to get away when it was time for college.  I went a bit further than she is going but she will still have to depend on herself for just about everything.

All this leads me back to the title of my post.  I'm sure some of you old farts saw a movie called "Hiding Out" starring Jon Cryer (now in 2 and 1/2  Men) and maybe you even remember it.  He plays a young stockbroker who is supposed to testify against the mob and then when they try to kill him he goes into hiding as a high school student.  So when he registers in the school he uses the name of Max Hauser from the can of Maxwell House coffee in the office.  Imagine my surprise when one of the graduates was named Maxwell Houser last night.  Did his parents hate him?  48 hours of labor?  Maybe they went to that movie as a first date?   Hard to say but I did get a chuckle from that one. 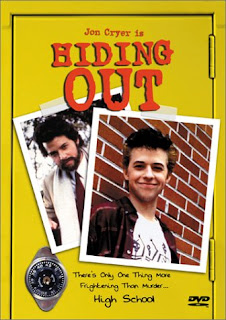 Tonight the PQ and I plan on playing a little poker.  First time for me in quite a while except for a little online fooling around.  So rust is apt to be a factor.  I have been doing some reading so I will try to put some of that into play.  I will try to put a bet or 2 down on the Belmont as well, if I get there early enough.  Hopefully I am richer tomorrow than I am today.  Hope you all make some cash as well.  Stay lucky you nuts.

Well the horses were more profitable for me than the poker.  Played in a tourney last night as did the PQ.  Every time I made a move it seemed things went backward for me.  Well not every time.  I did have a nice score with 2-2 on an A 10 J flop and another time with 3-2 suited when I flopped a flush.  But I had some horrible luck on a couple of hands which cost me a good bit and made a couple of stupid plays.  I also made a big mistake on one hand late in my tourney that cost myself a possible double up.  My end came when I was in the big blind with 10-6 suited.  Flop was 10 high and I led out at it.  A big stack across the table raised at me.  It almost put me all in to call.  I thought about it.  Possible he had a draw as it was a draw heavy flop with both straight and flush draws.  I had a backdoor shot at a straight and flush.  So I pushed in and he called for another 500.  He unfortunately had Q-10 and neither of us improved.  Out I go.  I thought I had a decent read on him that tipped me off that he wasn't that strong (and he wasn't, if I was sitting on K10 or better lol) and I couldn't afford not to go in.  After watching him play I knew it was very possible he had a draw only.

My big disappointment was screwing up 2 hands a bit earlier.  One of them I had called a raise preflop with 6-6.  Flop was 8-8-6.  Everyone checked to the gal just to my right.  She had shown a lot of propensity to gamble and it had paid off 3 or 4 times.  She bet 1000.  Everyone else folded and it came back to me.  I thought about flat calling but thought that would look suspicious.  Also I only had about 6K more.   As much as she gambled, and the way the hand went I thought she would be suspicious if I pushed it instead.  So I did.  She thought for a while but eventually let it go.  Afterwards I thought about it and decided I goofed.  If I just check and call, maybe she pushes on me instead.   Another hand I didn't bet at on the river when I was sitting with trips that were pretty well disguised.  If I bet, one of the guys after me probably calls and I pick up a couple K more.

On the horse side, late in the afternoon I was reading an update on the Belmont that says the track is really sloppy and muddy.  Only 1 horse had ever run in the mud (and he had won) and seemed to be worth taking a flyer on.  That horse was Ruler On Ice who went on to win as a 24-1 longshot.  Paid my entry fee for the poker.  So the day wasn't a total loss at least.
Posted by The Neophyte at 4:11 PM

Dang -- nice pick on the Belmont!