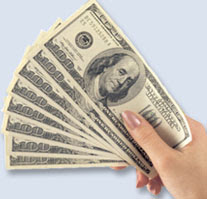 it's much more important than that.

So when last I posted I had just made $100 for sitting next to the luckiest poker player in Florida. Hitting Quad queens and winning $500 didn't make him the luckiest guy yet. Later on he did more. The poker room was running a new promotion after midnight. Each person who hit quads or better got paid off. The first guy got $50, the next $100 right up to $500. Didn't have to be the best for a half hour or anything, just needed to catch the hand.

Well Mr Luck certainly earned his name then. 2 guys had already won that promotion when he calls a raise in the small blind. Flop comes out K Q 10, all clubs. This guy pushes all in immediately. Everyone had the good sense to fold after that. He flips over his cards and there for all to see is AJ of clubs. Yup the man flops a royal. He went all in just to force everyone out as he didn't want to take someone else's chipstack away from them. So he wins $150 for the hand plus another $250 since he hit a royal and all royals get paid 250. So in the space of a little over 2 hours, Mr Lucky has won $900 from promotions at the poker room. He was also up about 300 from chips won from his opponents. He wasn't only lucky with promotions, he also played pretty aggressively with some pretty shall we say marginal holdings that hit big.

While he was doing this I was playing my normal tight self though a bit more aggressive than usual. Most of the players seemed to be pretty loose. I was surprised at some of the raises. But that's how it goes, some tables are really tight and some really loose. This one was pretty loose. I got some hands that somehow held up, hit a couple of nice draws, and some people just didn't believe me when I bet. So I had to prove it to them. And got some more chips. Before I knew it I was up about $300. A little later on I raised on the button with QQ. Flop is A-8-5 rainbow. Everyone checks and I make a 2/3 pot bet. Fold, fold, fold. Guy to my left said he had A rag so I showed him my queens. Surprised him a lot but since I had only shown down big hands he put me on a big ace. Which was just what I had hoped he would.

I then got into a pot with Mr Lucky on my right and a short stack on my left. Short stack raises to $8, Mr Lucky calls and I look at KK in my hand. I thought about pushing then and there but wanted to make sure the short stack stayed in the hand, tho I thought he would call a reraise, but I was also a little concerned with Mr Lucky. I knew he could be playing just about anything and he would probably call a reraise with any ace. So I wanted to see the flop and see if I was up against an ace.

Flop comes down 8 5 2. Short stack pushes in the rest of the way for about $25 and Mr Lucky calls him. I'm wondering if he played some crap like 8 5 so I just call. Turn and river are garbage. He checks both times and I bet him out. He folds and the short stack flips over JJ. He is unthrilled by my KK and I take down another $100 or so putting me over 400. The wife does well in the tourney but bubbles off the money at the end. They all put money into the pot when they reached the bubble so that the bubble boy (or girl in this case) got their buy in back. She was really unlucky too as her KK got cracked by QQ. She comes by my table and goggles at my Hellmuthian towers of chips. I was being my meticulous (anal) self and creating a pyramid of 2 and 5 dollar chips. She couldn't see the 25s as they were out in front of my other chips. She tells me her story and says she is too tired to play anymore. It is 2 am after all. So we go to cash out. I fill one rack with chips and then start handing her some stacks to help me carry them to the cashier. Then she sees the 25s. Damn. I cash out for $462. Not too shabby for a $60 buy in. Best night of non tourney poker I ever had.

Saturday I refereed a couple of games. The wife slept most of the afternoon away while I reffed. After I got home and showered I was starved as I hadn't had anything to eat since about 10 am and it was now after 6:30. I am never hungry while I referee and usually it takes an hour or so afterwards for my appetite to come back but once it does, I'll eat leaded paint chips for dinner. So we hit a local mexican place and fill up on enchiladas and such. It was just what the doctor ordered as far as my stomach was concerned. I asked my wife what she wanted to do. We had talked about going to see that new movie Red earlier in the day. She turns to me and says "You know what I want to do." I say "Poker again?" and she just nods. So we end up hitting the tables again. I did manage to play omaha this time. It was not nearly as profitable a night though I did end up plus about $40. Well actually I broke even, the $40 went to the wife when she got a bit low on the 1-1 no limit table. Still a fun night though we were out even later this time.

We woke up Sunday morning and decided we were now a bit too old to spend 2 nights in a row out until the wee hours. Still it was a good weekend all in all, in fact a very good weekend. We even had the boys over to dinner tonight for steaks. A tasty way to finish up the weekend. I was planning on getting to bed early tonight as I could use a good night's sleep now but of course, the poker gods are still in a giving mood it seems. I got into a tourney with about 350 players at 9 pm. Figured to play for an hour or so if I was lucky and get to bed. It was only a $3 buying but the winner gets over 700 clams. It's a little after midnight now and there are 19 left. I am sitting 9th now. Well I was 9th. I just ran 8-8 into aces and it's good night Irene. Still I made $27 which beats a stick in the eye. Sharp or dull. So good night all, gotta get some sleep before I turn into a pumpkin. Stay lucky you nuts.
Posted by The Neophyte at 10:48 PM

Just call me butter. And congrats on your win as well.